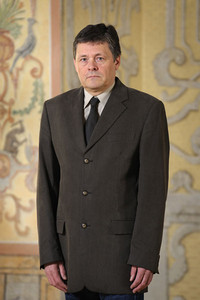 After graduation, he joined the DG SIGMA concern Olomouc as an independent technical expert, where he was jointly responsible for building automation control systems. In AQUACOOP he was a senior technical expert in the section of the development of technical management and automation. He then joined the Olomouc District Office as a member of the District Privatization Commission (evaluation of privatization projects and organization of auctions). In Hanácké Pekárny a Cukrárny, he worked as a programmer-analyst, implementing and expanding the business management software. Since 1992, his career has been linked with the Faculty of Medicine, Palacky University, which he joined as an economist.

From 1995 to January 2014 he served as Secretary, in charge of the finances and management of the Faculty. Recently he has participated in two major projects: the completion of the Theoretical Institutes of the Faculty of Medicine and the construction of the new building BIOMEDREG - Institute of Molecular and Translational Medicine. Complementing the original building of the Theoretical Institutes, both projects were funded from the Operational Programme Research and Development for Innovation with CZK 2 billion. Jiří thus participated in the largest investment to date in the history of the Faculty of Medicine.

For Jiří, the new position of Bursar of Palacky University in Olomouc is an expansion and follow-up of his work for the Faculty of Medicine, now spanning the university as a whole. As the Bursar he will utilise his professional experience and know-how concerning economic management, helping to develop and modernize the entire university. 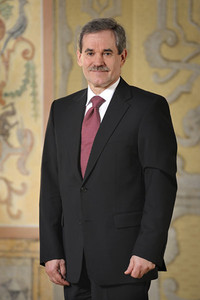 Rostislav started off his professional career as a researcher in modern history at the Vsetín Regional Museum, only to return to Olomouc soon after, to the Faculty of Medicine. Here he managed the library, introduced information technology and database services for biomedicine research (in November 1989 he was the spokesman of the Faculty’s Civic Forum Party). From the beginning of 1990, he was in charge of the preparation of the project of the PU Information Centre, spending the first half of 1991 as an intern at universities in Canada. From 1991 to 2006, he was the Director of the Information Centre (which included today's Media Centre, Conference Centre, Centre for Distance Education, Computer Centre, Library and PU Publishing). From 1996 to 1997 and from 2002 to 2006, he was director of the festival Academia Film Olomouc, which hosted many leading filmmakers, documentarians, photographers, and other artists (Marcel Łoziński, Vojtěch Jasný, Albert Maysels, Agnieszka Holland, Matej Mináč, Norbert Auerbach or Suzanne Vega). Rostislav is the Secretary of the PU Board of Directors.

Since 2007, Rostislav has been the PU Head of the Rector’s Office, ensuring management, organization, and administration associated with the operation of the University, and organizing conferences, conventions, and university celebrations. From 2008 to 2012, he was responsible for public relations and was the spokesperson for the University.

The Academic Senate of Palacký University Olomouc (UP AS) is a self-governing representative academic body, with 24 members. The UP AS members are elected from amongst the members of the academic community; each faculty is represented by two academic senators and one student senator. The term of office is three years. The UP AS sessions are open to the public. The UP AS Economic and Legislative Commissions prepare the foundations and opinions for detailed solution of individual issues which arise during Senate sessions. The UP AS is governed by the laws of the Czech Republic, in particular the University Law (Law No. 111/1998 Czech Law Col.) and UP internal rules, in particular UP Statutes and UP AS Election Rules.

The members of the UP Scholarly Board are prominent experts in the fields of the educational, scientific, research, and artistic activities of Palacký University. Its members also include persons who are not members of the UP academic community.

UP Scholarly Board Members

Internal members of the UP Scholarly Board:

Rulings of the UP Scholarly Board (see Notice Board)

The UP Board of Trustees is defined in the Czech University Law chiefly as a supervisory body with several executive powers. Its operation and authority is clearly defined in regard to the economic management of a public university and its related activities.

Members of the UP Board of Trustees

Records and rulings from sessions (Notice Board)

Palacký University Olomouc (UP), in accordance with revisions in the Higher Education Act (Act No. 111/1998, Czech Law Coll.), as amended, and on Article 12 of UP Constitution (Article 12), has established the Internal Assessment Board of Palacký University Olomouc. The Internal Assessment Board is an academic body of the university and its mission is to inspect and develop an internal system of quality assurance and of evaluating teaching, publishing, creative and related activities at UP.

The UP Internal Assessment Board:

Rules of Procedure of the Internal Assessment Board of UP (Internal norm, in Czech).