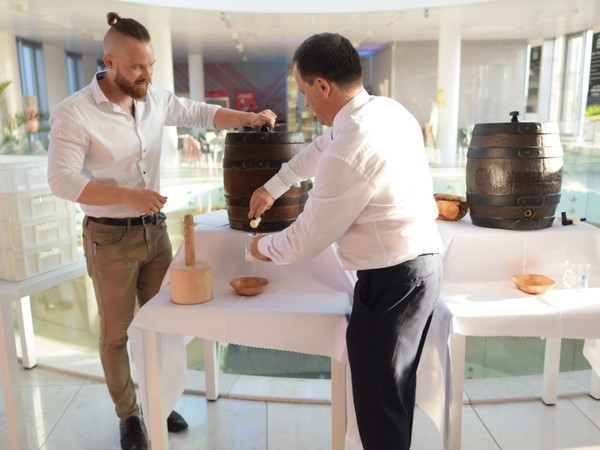 The newly established UP Experimental Microbrewery’s first batch of beer should be ready. Lukáš Kučera from the Department of Analytical Chemistry FS UP is on the left.
Photo: Volodymyr Pauk
Wednesday 17 August 2022, 11:30 – Text: Šárka Chovancová

Beer production and technological processes, the effect of beer on human health and its place in history as well as the history of chemistry – all of these will be offered by the newly established Experimental Microbrewery of Palacký University (UP) Olomouc. When brewing beer, students will gain information not only about the technological and chemical processes that give this drink its characteristic properties, but also about the beneficial effect of moderate beer consumption on human health. The brewery plans to brew its first batch of beer by the end of August.

“We want to gradually involve all faculties in our experimental brewery project, because the beer phenomenon can be examined from many points of view – whether they be the history of brewing, the development of recipes and beer culture over time, geographical differences in the brewing process, the use of modern technologies in contemporary brewing, or the health aspect of drinking beer,” said Lukáš Kučera from the Department of Analytical Chemistry, UP Faculty of Science (FS).

In the initial phase, the experimental brewery will brew 25 litres of beer per batch since according to current legislation its annual production cannot exceed 2000 litres. For this project, the Dean of the UP Faculty of Arts, Jan Stejskal, promised to free up unused basement premises in the building on tř. Svobody, which, thanks to its stable temperature and humidity, offer ideal conditions for brewing and maturing beer.

The brewing equipment will serve both scientific and academic purposes, as various learning modules and courses can be linked to this attractive topic. For example, the Department of Analytical Chemistry has already introduced the course “Chemistry of Beer”, to which it will now add the new course “Practical Chemistry of Beer”, thanks to the experimental microbrewery. “It will be focused on the study of all chemical processes that take place during the brewing of beer and its maturation in lager barrels,” noted Kučera.

Students will thus be able to investigate e.g. the role of various bacteria in beer fermentation or develop new methods of analysing the individual components used in the production of the golden liquid. The connection of the experimental microbrewery with the UP Faculty of Education also has great potential. “Its current curriculum can be enriched e.g. with a course focused on the issue of fermentation, which is a very important process in terms of food preservation. Fermentation can be utilised as part of crisis plans or for long-term food protection,” said Kučera.

Thanks to the experimental microbrewery project, the students of the UP Faculty of Medicine and Dentistry will also gain interesting information. “Beer contains a lot of beneficial substances for the human body. For example, the effect of its moderate consumption on the human gut microbiome, said to be our second brain, can be studied. The proper function of the microbiome plays a vital role in human health. The positive effect of moderate beer drinking on the cardiovascular system is also interesting, thanks to the presence of substances from hops,” added Kučera.

At present, the brewery is located in the premises of the Department of Analytical Chemistry. In the following months, the production technology will be moved to the basement of the Faculty of Arts  located on tř. Svobody.