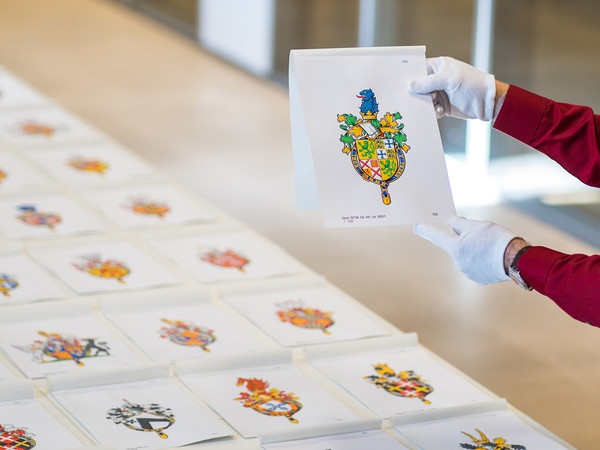 Photo gallery from the book in progress.
Photo: Jakub Čermák. On the picture in the text, Jiří Louda receives an honorary degree from UP; photo: UP Žurnál archives. The second photograph shows Jiří Louda’s diary; photo: Aleš Prstek.
Wednesday 20 May 2020, 8:00 – Text: Ivana Pustějovská

History lovers should pay attention: Palacký University Press is preparing a remarkable book for publication. The pivotal work of the heraldist Jiří Louda, The Coats of Arms of the Knights of the Order of the Garter, will be published in Olomouc. The publication, with its more than six hundred pages, will portray a thousand depictions of the coats of arms of the oldest European knighthood order and the third most important British decoration. The book will be published in autumn 2020 as a tribute to what would have been the 100th birthday of Jiří Louda, a respected heraldist who is also the author of the design for the Czech national coat of arms.

“Jiří Louda considered The Coats of Arms of the Knights of the Order of the Garter to be his masterwork. He worked on it diligently almost up until his death and really wanted the book to be published. Unfortunately, he did not live to see this by his death in 2015. His granddaughter decided to fulfil his legacy and contacted our university publishing house, based on the recommendations of his grandfather’s friends,” explained Aleš Prstek, director of the UP Press. The book will be published under the imprint of Palacký University not only because Jiří Louda, a native of Kutná Hora, spent most of his life in Olomouc, but also because Palacký University awarded him an honorary doctorate in 2004. The university appreciated both his merits in the field of heraldry and his personal commitment to his homeland.

Jiří Louda enlisted in the Czechoslovak army voluntarily after graduating in 1939. After the occupation of Czechoslovakia by Nazi troops, the 18-year-old decided to leave the country and fight against the enemy from abroad. Through Poland and then to France, where he was accepted into the Foreign Legion, he eventually reached Great Britain. There he graduated from officer’s school and became a paratrooper. However, a training injury prevented him from becoming one of the paratroopers deployed in the protectorate. Instead, he operated a radio station and, among other things, communicated with insurgent radio operators during the Prague Uprising. After the end of the war, he returned to Czechoslovakia as a professional soldier. He worked as an artillery instructor at the Olomouc military school, but only until 1947, when he was released. “I received a letter from the artillery commander, which I’ve kept until today. It said it was found out that I did not have a positive enough attitude towards the people’s democratic establishment and our commitments to our ally, the Soviet Union, and that I should question my conscience. Before I managed to question it, I was let go,” he recalled, regarding his first years in his liberated homeland. In the spring of 1949, after the communist putsch, he was even arrested by the secret police and sent to Mírov, a maximum security prison, without any court proceedings. He was released without explanation in 1951. In 1968, under Dubček, Jiří Louda was rehabilitated and promoted to the rank of major, and in 1991 to the rank of retired colonel.

For many years he worked in the Olomouc Research Library and devoted himself fully to his beloved heraldry. He became interested in the drawing of coats of arms already at a young age, also under the influence of his father, a professor of drawing at the Kutná Hora high school, from whom he inherited his artistic talent. The decisive period for his future focus on heraldry was his wartime stay in Great Britain, where he was able to get acquainted with truly genuine heraldry and where he also made several study stays in the oldest European heraldry office – the College of Arms in London. In addition, he made his first contacts with the local real-life royal heralds, which he maintained and purposefully expanded over the years.

“Jiří Louda’s own life story is remarkable, and we therefore decided to commemorate it in the forthcoming book. We have added ten more chapters to his work, which will take the reader through the life of a herald, a soldier, a war veteran, and a patriot,” added Prstek.

Several personalities took part in the book: the author of the biography is Michal Šimůnek, who has long been dealing with the fate of father and son Zdeněk and Jiří Louda. He works at the Institute for Contemporary History of the Czech Academy of Sciences. The author and editor of the heraldic part is Karel Müller, a friend and colleague of Jiří Louda, a UP graduate, historian, archivist, and heraldist who works as the director of the Opava Land Archives. The graphic design of the publication will be provided by another graduate of Palacký University Olomouc – graphic artist Radim Měsíc. Jiří K. Jurečka, a long-time technical editor at UP Press, is in charge of the scanning and colour corrections of the originals of Louda’s illustrations and preparing the publication for printing. “I think that just looking at the names in the publication team, it is clear that we are trying to make the book representative in all respects and that we have fulfilled Jiří Louda’s legacy,” says Aleš Prstek.

The book Jiří Louda: Erby rytířů Podvazkového řádu / The Coats of Arms of the Knights of the Order of the Garter will be published in a bilingual English-Czech version. “The Most Noble Order of the Garter was founded in 1348 by King Edward III. Today, it is headed by the Queen, and Prince Charles is a member. We therefore believe that the book will also attract English readers. Our big dream is to hand over one copy to the Queen,” adds UP Press director Prstek. The book, which will be published under the auspices of UP Rector Jaroslav Miller, should appear on the bookshelves in the autumn of this year, when an exhibition at the Olomouc Regional Museum is being prepared for the centenary of Jiří Louda’s birth.

For more information and pre-order of the book, please visit louda.upol.cz/english 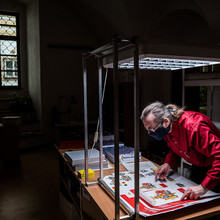