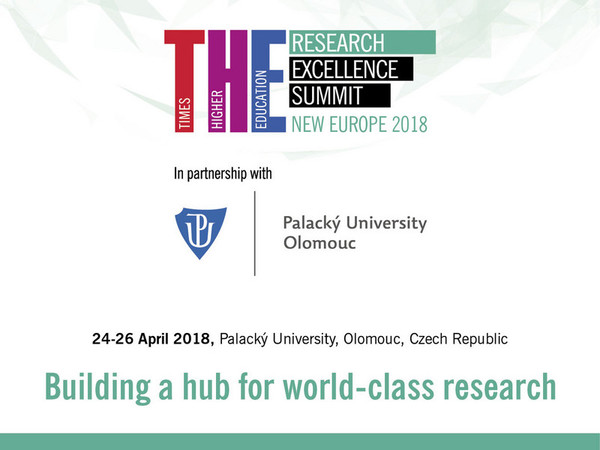 Three Czech universities placed in the top ten in the THE New Europe 2018 Ranking, which evaluated universities from the 13 countries which have joined the EU since 2004. The best Czech placement was Charles University Prague at number 4, Masaryk University Brno at number 7, and Palacký University Olomouc at number 10. Topping the list is the University of Tartu in Estonia. The highly respected Times Higher Education company published its rankings at the global THE Research Excellence: New Europe Summit, which is being hosted by Palacký University Olomouc since this Tuesday.

The ranking includes 53 institutions from the newest EU member states (with the exception of Malta). Czechia has the highest number of universities listed in the rankings, with 13. Poland has 12, Hungary 7, and Romania 5.

The 10th place showing for Palacký University represents success, according to its rector, Jaroslav Miller. "Our result can be looked at in two ways. On one hand, we can be satisfied that we are in the top ten, higher than many other universities. On the other hand, we have reason to keep improving. There is no doubt that an analysis of our weaknesses and strengths awaits us – to which we must subordinate our internal university strategy," the rector said. According to Miller, the university's unambiguous strongpoint is its scientific activities. "In science, our indicators have rocketed skyward. And this is combined with publications in prestigious professional journals and works which are oft-cited," he added.

The rankings company used the same methodology as with its world rankings. It focussed on evaluating universities in several areas, such as the quality of teaching, science and research, citations, the university's international environment, and co-operation with the corporate sector. For example, the University of Tartu attracted attention in the "New Europes" ranking not only due to its overall first place, but also because it placed top in the evaluation of the quality of research. In overall second place was the Cyprus University of Technology; and in third place, the University of Cyprus.

Presentation of the rankings, and explanation of the methodology used were significant points of the summit, taking place for the first time ever in Central Europe. The unique summit and the rankings should point out that the Central European region has undergone huge transformations in recent years, and has the potential to become a pan-European research hub. "This is a rapidly developing, highly ambitious region. It's fantastic to be exploring its current centres of excellence, its rising stars of higher education – and considering the steps it must now take to boost its reputation and influence on the global stage, to rival the traditional heavyweight research regions of Western Europe, Australia, East Asia and North America," said Phil Baty, Editor-in-Chief of the THE World University Rankings. More information is available here.