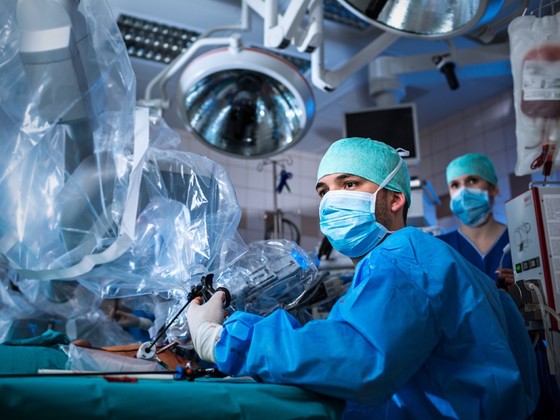 Surgeons from the Department of Urology, UP Faculty of Medicine, have achieved an outstanding success. They have developed a new technique which significantly reduces incontinence in patients who have undergone robotic surgery for prostate cancer. Their results were published in a prestigious journal of the European Association of Urology, European Urology, which features the most prominent studies in the field.

“The surgical removal of the tumour requires radical prostatectomy, that is, the removal of the entire prostate. The urethra is then connected to the urinary bladder by a simple surgical union called anastomosis,” explained the main author of the study and the co-creator of the new technique, Vladimír Študent Jr from the Olomouc department. The most frequent postoperative complications of this standard procedure include spontaneous incontinence. This can be however eliminated by a technique called Advanced Reconstruction of Vesicourethral Support (ARVUS). Olomouc experts used muscles in the pelvic floor which “remained” after the prostate removal.

“Following the radical prostatectomy, we pleat the remaining muscles and create a sort of collar, a hammock, which serves as a suspensory support. Incontinence is then reduced to a minimum,” clarified Vladimír Študent Jr. “We have maintained and supplemented the standard procedure. In fact, we have only done what no one has ever thought of – we put the muscles back and fixed them to the urinary bladder,” added Head of the Department of Urology and one of the authors, Vladimír Študent Senior.

The benefits of the new technique were verified with two thirty-member groups of men with a localised prostate cancer. The first group of patients underwent the surgical procedure using the new technique, whereas the second group was operated according to standard procedure. “When we compared the two groups, we found out that patients from the first group achieved complete continence much sooner and faster, sometimes within hours after the surgery. Within two months, 70% of them were continent, as opposed to 20% in the other group,” said Vladimír Študent Jr.

Since the completion of the clinical study in mid-2014, Olomouc surgeons have performed nearly 500 operations using the modified surgical method. It has been presented with considerable acclaim at a number of domestic and foreign conferences; in addition, their article has been published in a globally renowned journal. Apart from the recognition in academic circles, the research team highly values the benefits that this new technique has for their patients. “We have managed to significantly increase the quality of their lives. For a massive majority of them, problems related to incontinence are a very sensitive issue and a serious social and hygienic problem, one which is really hard to cope with,” confirmed the head of the department.

Robot-assisted surgeries are conducted by the surgical team at the Palacký University Centre of Robotic Surgery, which has been in operation for seven years. Its basic equipment includes the da Vinci Surgical System S HD, which replicates the movement of the surgeon’s hands by its interactive arms with surgical mini-instruments. They are inserted into the patient’s body through miniature incisions and controlled by the surgeon from a joystick console.