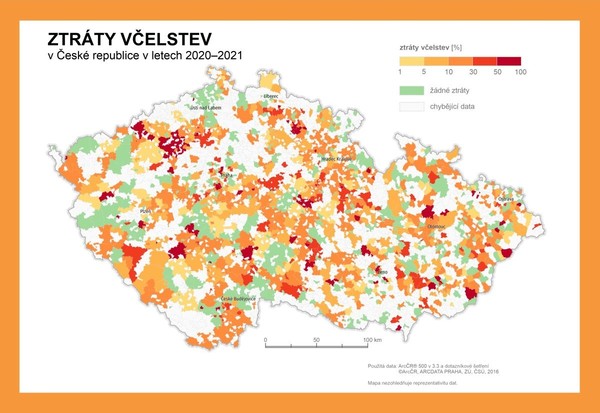 This winter caused less damage for domestic beekeepers than the previous one. According to the results of COLOSS: Honeybee Winter Colony Loss Survey, in which experts from the Department of Biochemistry and the Department of Geoinformatics of the Faculty of Science are participating for the eighth time, less than 15 per cent of production colonies did not survive the winter months. The number of beekeepers who lost all bee colonies this winter has also decreased. All in all, less than ten per cent of respondents recorded more than 50 per cent losses at the end of winter. The biggest mortalities were reported by beekeepers in the Pardubice and Vysočina regions.

“According to questionnaires from 1745 respondents, we have information on 26,592 bee colonies this year. In total for the whole Czech Republic, this year’s losses of production bee colonies were 14.5 per cent. Unlike the previous year, when Czech beekeepers suffered large-scale mortalities of bee colonies, this year’s losses were lower overall. However, they did not fall below ten per cent, as we recorded in the pilot year 2013/14 or in the 2015/16 survey, which followed the mortality year 2014/2015,” said Jiří Danihlík from the Department of Biochemistry, UP Faculty of Science, according to whom this year’s bee colonies losses range at the levels of 2016/17 to 2018/19.

In the year-on-year comparison, the number of beekeepers who lost all bee colonies decreased this year. “Nevertheless, even this year, 8.2 percent of respondents recorded more than 50 per cent loss of bee colonies. Respondents who recorded high bee mortality, stated in the comments that around September and October at the sites there was an intense robbery between colonies, which also occurred at the surrounding sites in the area. Increased mortality also affected surrounding beekeepers, sometimes even entire organisations. Beekeepers mentioned varroosis, hunger, and viruses as causes. Several cases also reported poisoning of bee colonies during rapeseed flowering,” said Danihlík.

In the current survey, experts also asked beekeepers for the first time about their satisfaction with honey production. “We do not intentionally ask about the average honey yield, but about the subjective opinion of beekeepers. Last year’s honey yield was rated by 26 per cent of beekeepers as rather below average and 39 per cent as low. Long-term monitoring of this issue will provide us with interesting data, which we will be able to evaluate in the context of landscape changes and from which we could derive trends in the future,” said Jan Brus from the Department of Geoinformatics.

Thanks to regular monitoring of bee colonies’ overwintering, experts from the departments of Biochemistry and Geoinformatics have found that extensive bee mortalities recur in the Czech Republic on average once every two to three years. Some time ago, scientists launched a unique interactive map of the Czech Republic (https://colosscz.webnode.cz/ztraty-vcelstev/) with data on the loss of bee colonies in individual regions, the density of bee colonies, and the average production of honey per bee colony.

“In cooperation with our research partners, we are continuing our research into bee immunity; this year we will focus on resistance to viruses. We will also address this topic in the education of beekeepers. And because beekeepers are increasingly using oxalic acid, we plan to check its effect on bee health in various types of applications,” added Danihlík.

There are about 696,000 bee colonies and almost 61,000 beekeepers in the Czech Republic. Data from the survey for the Czech Republic are sent annually to the international COLOSS association. Detailed data can be found at www.coloss.cz.