The new rector of Palacký University Olomouc, Martin Procházka, and the historically fourth dean of the UP Faculty of Health Sciences, Jiří Vévoda, have been inaugurated. They received their insignia and took their inaugural oaths at an assembly in the Archbishop’s Palace in Olomouc, which was attended not only by representatives of other faculties and departments of Palacký University, but also by representatives of other universities and prominent personalities of the region.

First, however, Jaroslav Miller, who headed Palacký University from 2014 until spring 2020, symbolically handed over the Rector’s Office to the UP Academic Senate chairperson, Jiří Langer. “I would like to wish the new rector and the dean every success on the path that Palacký University has taken. The path to a top research university in the wider Central European region, one which is highly internationalised and heard in the public space for its advocacy of an open society, freedom, and democracy,” said the former UP rector.

Then the chairperson of the Senate decorated Martin Procházka, who took over the leadership of Palacký University on 1 May this year, with the Rector’s chain. “It is an extraordinary honour and the absolute highlight of my academic career. I feel both proud and humbled when I think of the history of higher education in Olomouc and the long line of great men and women who have led the university,” said the new rector in the opening words to his inauguration speech.

Prof. MUDr. Martin Procházka, Ph.D.
Graduate of the Faculty of Medicine of the University of Pardubice, Professor of Gynaecology and Obstetrics, took over the Rector’s Office at Palacký University Olomouc on 1 May this year. Prior to his success in the elections for rector, he headed the UP Faculty of Health Sciences (FHS) from 2019. Since 1994, he has worked at the Department of Obstetrics and Gynaecology at the UP Faculty of Medicine and Dentistry (FMD) and University Hospital Olomouc (UHO), and later he headed the Department of Medical Genetics at the FMD and UHO and the Department of Midwifery at the UP Faculty of Health Sciences. His professional work focusses on perinatology, foetomaternal medicine, and medical genetics, especially on serious complications during pregnancy and the issue of hereditary disorders of blood clotting. As a physician, he specialises in high-risk pregnancies, thrombophilic conditions, and outpatient gynaecology and prenatal care, infertility, and endometriosis.

In his speech, he thanked his predecessor for the work he had done. Among other things, he emphasised again that he wanted to be a rector for students, one who always has an open door for them. “It is important for me to know what students think, to build relationships based on trust with them. I would like students to be involved as much as possible.” In his speech, the rector also mentioned that the art of critical thinking is a key skill which the university has to instil in its students for it is essential for orientation in the 21st century, amidst the flood of information. “We must try our best to defend academic freedom and freedom of research; we must strive to maintain an absolute top level of quality in science and research. It is important to encourage students to think and act independently and freely in the spirit of traditional European values; this is the most effective way to combat scepticism, populism, and other dangerous phenomena in society.”

Subsequently, Martin Procházka, as Rector and Dean Emeritus of the UP Faculty of Health Sciences, together with the chairperson of the UP FHS Academic Senate, Lukáš Merz, inaugurated Jiří Vévoda as Dean of the Faculty of Health Sciences. The current Vice-Dean for Science, Research and Lifelong Learning succeeded in the dean’s election announced after Martin Procházka was elected Rector; Vévoda assumed the leadership of the faculty on 1 August 2021.

“The fact that it was my predecessor who has become the rector of our university shows that the Faculty of Health Sciences is an integral part of the association of faculties that are jointly and inseparably called Palacký University Olomouc. Although it is the youngest faculty, it has proved its indispensability in the last two years, as it educates non-medical professionals who have made a significant contribution to the handling of the pandemic in its darkest hour," recalled the UP FHS dean. In his inauguration speech, he thanked all those who are involved in teaching at the faculty in any way but at the same time noted that the faculty lacks its own specialised teaching and working spaces.

Mgr. Jiří Vévoda, Ph.D.
He has been heading the UP Faculty of Health Sciences as its fourth dean since 1 August this year. Previously, he was the Vice-Dean for Science, Research and Lifelong Learning, and after then dean Martin Procházka was elected UP rector, Vévoda was entrusted with the leadership of the faculty. He has been working at Palacký University since completing his doctoral studies in social medicine in 2010; his workplace is the Department of Humanities and Social Sciences at UP FHS. He has also been a member of both the faculty and university Academic Senate (UP AS) and chairperson of the UP AS economic committee. In addition to teaching, he focusses mainly on psychosocial risks in health care and on the motivation and job satisfaction of health care personnel. He has managerial and economic work experience, having worked for the largest insurance company in the country and also at the Czech Ministry of Health.

He also pointed out that the time may not be far off when there will be a greater shortage of professionals in some non-medical health professions than there is now. “I am confident that health policy makers will realise the graveness of the situation and will begin to remedy it as soon as possible. The sooner the perception of the societal relevance and status of non-medical health professions improves, the easier it will be for me to implement my agenda announced in the dean’s election: high-quality professional education, a high degree of internationalisation, the growth of science and research, a safe working environment for both academics and administration, and a safe learning environment for our students,” concluded Vévoda.

During the ceremonial assembly at the Archbishop’s Palace, Martin Procházka and Jiří Vévoda also presented their teams of vice-rectors and vice-deans, respectively, who will help them to achieve their goals. The term of office for both high officials is four years, i.e. until 2025. 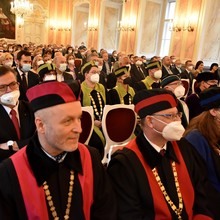 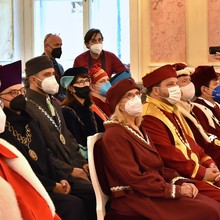 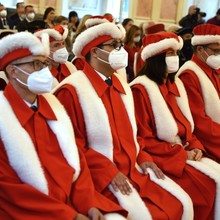 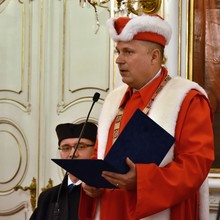 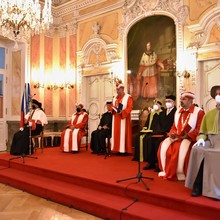 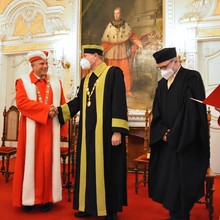