Palacký University holds its position in THE rankings 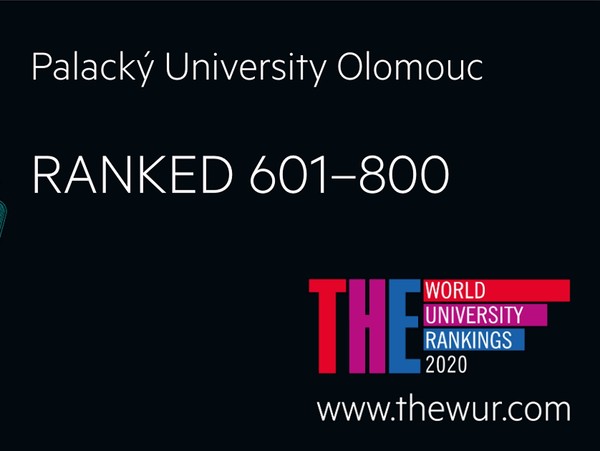 Palacký University has confirmed its position in the international Times Higher Education World University Rankings. Similarly to the two previous years, it has placed together with Masaryk University in Brno in the category between 601st and 800th positions this ear. Only Charles University in Prague had a better score among Czech universities (401st to 500th positions).

The rankings, one of the three most reputable rankings in the world, evaluated 1800 universities, out of which 1396 from 92 countries have been listed. The Czech Republic is represented by 17 universities, three more than a year ago; the University of South Bohemia in České Budějovice, the University of Hradec Králové, and Mendel University in Brno are those who extended Czech representation. The first one thousand universities include 5 Czech institutions.

“In the 2020 Times Higher Education rankings, Palacký University again ranks among the three elite universities in the Czech Republic and ten best universities in Central Europe. It is clear proof of the fact that a close elite of research institutes is being gradually formed in Czechia. In addition, Olomouc’s university is one of the few Czech universities that have defended their place from previous years, which seems like a very good result in the light of the rapidly growing competition from Asian universities. The placements of our university in such rankings has a tremendous impact on the university’s reputation as well as international partnerships in science, research, and excellence. We have managed to get so far in the last few years, so let me thank the whole academic community, because this is always a collective work and a joint success,” said UP Rector Jaroslav Miller.

“One piece of pleasant news is that we have achieved improvement in partial parameters, mainly in Research, where we made a significant shift from 925th position to 681st. We have improved in two out of three indicators: in research productivity, and science and research income. A positive score was also achieved by our academic workers (from 42.5 to 46.9), which may be, despite all the reservations to measuring scientific performance this way, considered proof that UP is truly creative and that our work has received great acclaim on the international level,” said Hana Marešová, Vice-Rector for Strategic Planning and Quality at UP. In Citations, the only Czech university that had a better score than UP was Charles University, which however has been worse off compared to the previous year (this year 53 points, last year 55.9).

Vice-Rector Marešová sees a positive signal also in the improved parameters in the area of teaching. UP has improved in four indicators, including teaching reputation. UP currently holds 872nd position, but it was 905th last year. “This is a sign that the university strives to find balance between its two main activities,” added Marešová.

UP’s best score was achieved in International Outlook, where it placed at 424th position.

First place in the global rankings is once again held by the University of Oxford. The California Institute of Technology, number 5 in the previous year, holds second place this year, pushing the University of Cambridge into third place. More detailed information is available here.