Czech for foreigners in a hip, modern guise. Another volume of the Czech it UP textbooks series is out now 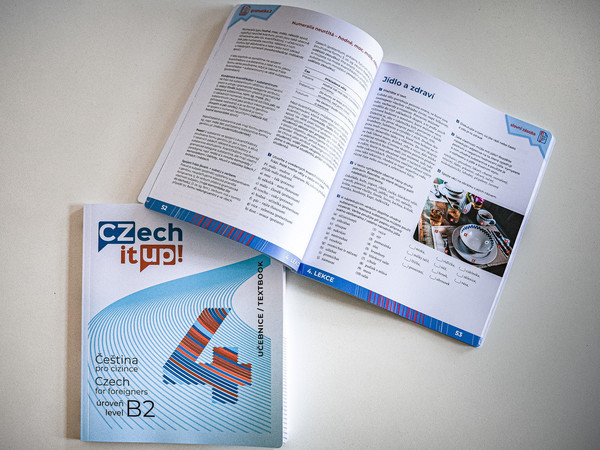 Austria, Ukraine, Poland, Germany, Spain, Romania, Finland, Russia, Taiwan, and of course, Czechia. There, wherever foreigners are learning advanced Czech, it’s from the Czech it UP textbooks published by Palacký University Press at the C1 level in February. These were the first of a series of a new concept in textbooks teaching Czech to foreigners. UP Press has now added other volume to the series – at the B2 level.

“The first textbooks for C1 quickly became favourites of students and teachers alike. We worked with them ourselves at this year’s Summer School of Slavonic Languages in Olomouc and also during the semester at the UP Faculty of Arts, and the feedback was very positive. We believe that these new textbooks at the B2 level in the new concept will also meet with success. This time we put a large emphasis on getting to know foreigners through spoken Czech and with different varieties of our national language, which for non-native speakers is useful, attractive, but at the same time a quite difficult theme,” revealed Darina Hradilová from the Department of Czech Studies at the UP Faculty of Arts, head of the group of authors responsible for both textbooks.

Czech it UP Volume 4 makes use of the Oxford style of language learning textbooks, where each theme is dealt with “magazine style”, on facing pages. Students working with the book will learn to communicate not only on traditional themes, but also on modern trends, where the textbook attempts to accommodate the younger generation. Students can discuss for example the equal rights of men and women, cultural differences in perceiving and spending free time, questions of faith, and what different cultures perceive as politeness.

“One of our visions, among others, is also the attempt to strengthen the role of Palacký University in the area of teaching Czech to foreigners, which already has a long tradition in Olomouc. The publication of an additional volume in the Czech it UP textbook series is but another step on the path to fulfilling our goals. I believe that Czech it UP will find its way throughout the world, and also after the unfortunate pandemic times subside, it will be able to further expand our activities for foreign students,” said Martin Kudláček, UP Vice-Rector for Foreign Relations.

Before 2020, hard hit by the Covid-19 pandemic, UP had experienced increasing interest every year on the part of foreign students to study in Olomouc. Hopefully the university will soon be able to capitalise upon that again to realise its further plans, reflected among others by its acceptance into the prestigious Aurora Alliance of universities.

Just like the C1 level textbook, the new B2 level textbook is connected to the webpages czechitup.eu, on which students and teachers will find supplemental audio-visual materials. The creative team has maintained its tried and true philosophy and again made their own video and audio recordings for each chapter. Also guaranteed are new photography and the vibrant and catchy design of graphic visual aids.

“We’re very happy with the Czech it UP series. The textbooks satisfy the most demanding criteria in terms of form and content and at the same time provide interesting new flair to textbooks of Czech for foreigners. I believe that we’ll complete the entire series in the coming year, and it will become a favourite on the Czech market,” added Aleš Prstek, UP Press Director.

The entire Czech it UP series should be finished in 2021, according to plan. In addition to the C1 and B2 levels, the other end of the spectrum will be covered in February 2021 with a textbook for complete beginners (A1). The remaining two textbooks (A2 and B1 levels) will complete the series.

More information is available at czechitup.eu.