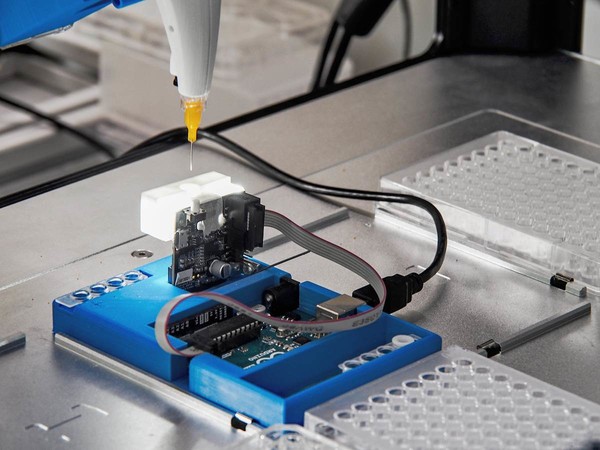 A robotic system called Popelka (Cinderella), designed to automatically prepare samples for the research of plant behaviour in various environments, has been developed by researchers at the Centre of the Region Haná for Biotechnological and Agricultural Research (CRH) in collaboration with Stäubli Systems and Palacký University’s Science and Technology Park (STP). Unlike the fairy-tale character, the automated device does not sort peas from lentils, but can very accurately, meticulously, and persistently transfer miniature plant seeds to plates, test tubes, or flowerpots, thus significantly speeding up the preparation of experiments.

“The handling of seeds, often smaller than poppy seeds, is relatively complicated. That’s why we considered the possibility of automating the whole process. In the past, we dealt with automation in another project, so we thought of building a device that would ensure the transfer of seeds. There was a team of four of us building it for about ten months,” said Pavel Mazura, the principal researcher of the Proof-of-Concept (PoC) project from the new GAMA programme (“Programme of applied research, experimental development and Innovation GAMA”) by the Technology Agency of the Czech Republic (TA CR).

The device combines automated transfer and examination of seeds with the preparation of necessary gels and liquids containing fertilisers or test substances. “Cinderella will create a complex sample that laboratory technicians used to have to prepare manually. The preparation of samples will be more accurate, faster, made in large quantities, and even in continuous operation if necessary. In addition, the entire device is located in a box with air filtration and a UV lamp, which ensures the sterility of the environment,” explained the molecular biologist Mazura.

Pavel Klimeš, an analytical chemist from CRH, played a key role in the development of the device. “The most difficult thing for me was to get to the heart of the programming of various devices and their connection into one functional unit. However, we felt this was a fulfilment of our vision, an opportunity to penetrate the mysteries of modern technologies. On the other hand, we were able to capitalise on knowledge from our own fields and tailor Cinderella to our needs,” added Klimeš, the co-inventor of the device, which is going to be patented; the patent process has already started. Although Cinderella is intended for laboratories providing plant phenotyping, it is also able to transfer other small objects. Its application can therefore be more diverse and goes beyond research. The CRH and STP representatives will now be looking for a commercial partner interested in using the device alone or as part of a larger facility.

CRH, which brings together research teams from the Faculty of Science at Palacký University Olomouc and the Olomouc branches of the Institute of Experimental Botany of the Czech Academy of Sciences and the Crop Research Institute, is the national coordinator for plant phenotyping within the Czech Plant Phenotyping Network (CzPPN). According to the CzPPN coordinator Lukáš Spíchal, the new device can significantly streamline the entire research process in this field. “We are able to analyse plant growth in automatic mode using non-invasive sensors, in really large quantities. The critical point in the preparation of plants is the transfer of seeds, which means high demands on the manual work of laboratory technicians. The robot will take care of this, so the laboratory technicians will be able to engage in other activities,” explained Spíchal, according to whom automation in science is necessary. That is why he is considering closer cooperation with technical universities, which could contribute to the development of other devices.

One of the important factors in the success of the project was cooperation with a company that provided a necessary robotic arm for testing, free of charge. “We are very pleased that we are overcoming the mistrust between academia and industry, and the Cinderella project was an exemplary collaboration that led to a great result. We are very happy for that,” added UP STP Director Roman Jurečka.

The cooperation was also highly appreciated by a representative of the company. “Stäubli Systems aims to support education and research in its activities in the Czech Republic, and thus increase the students’ interest in technical fields at both traditional technical and non-technical universities. Our company was happy to be part of this successful project, and we offer further cooperation to other partners who will put Cinderella into practice,” said Jindřich Kára, the company’s marketing specialist.