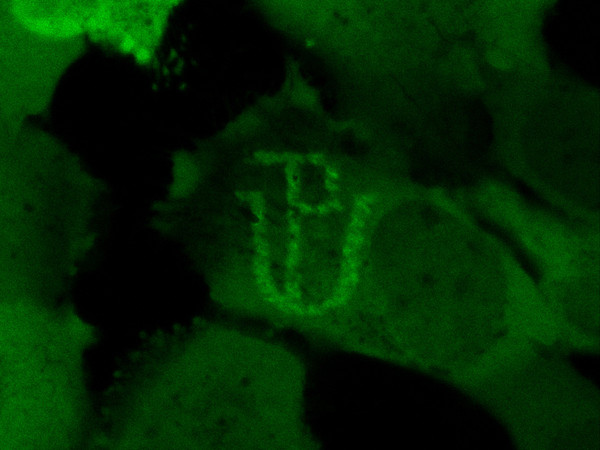 An approximately 400-fold magnified human cell was thermally damaged in the cytoplasm by laser-activated plasmonic nanoparticles. The laser path was chosen so that the resulting damage had the shape of the UP logo. The green colour represents a protein (HSP70) marked with fluorescent dye, which binds rapidly to the thermally damaged area and thus allows the visualisation of the entire process. Photo: IMTM
Tuesday 2 February 2021, 13:30 – Text: Peter Vanek

In extreme cases, old and damaged proteins can cause problems in the human body, leading to the development of Alzheimer’s and Parkinson’s diseases or cancer. Researchers from Palacký University Olomouc and Masaryk Memorial Cancer Institute in Brno have now come up with a revolutionary method that allows monitoring and investigating the processes in these proteins, by means of targeted damage using silver nanoparticles and a laser. The discovery was also acknowledged by the journal Nature Communications, which published the results of the study in January.

Proteins are the essential building blocks of living organisms. They are formed in cells in a strictly controlled way during a process called translation, when information from individual genes is read, transcribed, and translated into long chains of amino acids. The resulting compounds are protein structures with various properties – from oxygen-binding blood pigment to the solid horn of the rhino. Proteins are not immortal, they only have a temporary lifespan, and the cell may not always be able to produce them.

Old, damaged, and defective proteins can cause problems; in extreme cases, they can even be life-threatening. If the cells cannot get rid of such proteins or at least neutralise their harmful effects, it results in the development of diseases called proteopathies. Some examples may be the accumulation of toxic amyloid beta proteins, the tau proteins, and other problematic proteins causing cellular stress and complete tissue degeneration. That can result in Alzheimer’s, Parkinson’s, and other degenerative diseases, including cancer.

The study of protein stress at the cellular level is an important part of research into the above-mentioned diseases. Researchers investigate the factors that cause or exacerbate cellular stress and that have potential use in the treatment of diseases such as cancer. They are also interested in how the cell copes with defective proteins, and how to influence these processes pharmacologically. Surprisingly, there is still a limited number of techniques to target damaged proteins in the cell.

On the other hand, DNA can be damaged very precisely in the cell; scientists can monitor in real time how the repair mechanisms cope with the damage. With/ proteins, this has not been practically possible until now. Scientists had no choice but to expose cell cultures to elevated temperatures and various toxins, and then measure the resulting effects on the entire cell population with the use of indirect biochemical methods.

Silver nanoparticles and a laser beam

Under the leadership of Martin Mistrík, a team of scientists from the Institute of Molecular and Translational Medicine at the UP Faculty of Medicine and Dentistry in cooperation with the Regional Centre for Advanced Technologies and Materials at the UP Faculty of Science and Masaryk Memorial Cancer Institute in Brno, and also with the support of Czech BioImaging, have been able to develop a breakthrough method combining targeted protein damage inside single cells and simultaneous microscopic analysis. The method uses special silver nanoparticles, known as plasmonic nanoparticles, which function as miniature, yet very powerful heat sources that can be activated by a targeted laser beam.

“After the irradiation, plasmonic nanoparticles absorb the laser light and then emit intense heat, which damages proteins in the immediate proximity at the micrometre scale,” says a co-author of the study, Aleš Panáček from the Department of Physical Chemistry, UP Faculty of Science, who specialises in the study of nanoparticles.

Significance for the treatment of neurodegenerative and oncological diseases

The thermal damage, similar to natural protein degeneration, triggers corresponding cellular processes. Thanks to the new method, scientists can select a specific part of the cell, aim the laser beam, and literally burn this area in order to map the subsequent processes. In the study, whose contribution to the scientific community was acknowledged by the prestigious journal Nature Communications on January 29, the researchers presented this new method – and even more.

“With the help of this method, we have also revealed previously unexpected connections between the ways in which the cell deals with damaged proteins, and we’ve also discovered a new factor that significantly contributes to their elimination. In the future, pharmacological targeting of such factors will help us make anticancer thermotherapy more effective or lead to the prevention or treatment of the above-mentioned degenerative diseases,” says the study’s leading author Martin Mistrík from IMTM, concerning its importance.