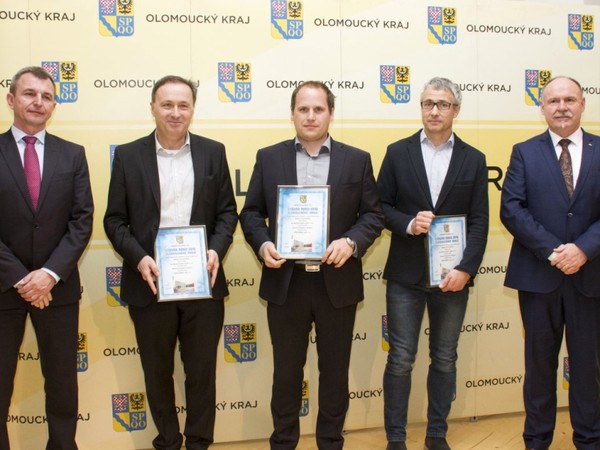 After two years, the Olomouc Region again awarded prizes to the best buildings recently erected in its territory. Among those who scored were also complexes related to Palacký University. The winner in the category of community facilities and public space adjustments is the Application Centre BALUO at the UP Faculty of Physical Culture; the architects of the Fortress of Knowledge at UP were granted honorary mention.

“It is a great achievement for our faculty, since we have been trying to give a facelift to a neglected part of the town occupied until recently by dilapidated military compounds, turning the area into a beautiful space for living. Our goal has been to build a functional facility to support and research the field of healthy lifestyle, however we also wanted to leave our children some good architecture and aesthetically improve the quarter of Olomouc-Neředín. The award granted to AC BALUO is a confirmation of the fact that we have been doing a good job,” said Pavel Král, Secretary of the UP Faculty of Physical Culture.

In its category, the Application Centre BALUO beat the Olomouc Rose Gardens and the Cultural Centre in Šternberk. The complex, including a diagnostic studio, laboratories, and sporting grounds equipped with smart technologies, is a one-of-a-kind science-technology park in Central Europe, aimed at the prevention of civilisational diseases and the support of a healthy lifestyle. The centre was designed by the r-atelier from Olomouc, and its construction was supported by a grant from the CzechInvest Operational Programme “Enterprise and Innovation”. The centre was officially opened in November 2016.

In close proximity to the Application Centre BALUO, a former military laundry is currently being converted into the Centre for Kinanthropology Research, due to open in 2017. “Various outdoor works are part of the project, including a number of outdoor activities that should complement the environs of the buildings and provide a compact and unified design for the entire Neředín Campus,” added secretary Král.

The Olomouc Region also awarded the interactive science museum at UP, the Fortress of Knowledge, which was transformed from a former military storehouse within the premises of the Crown Fortress in the centre of Olomouc. The museum received an honorary citation in the category Reconstruction and Restoration.

“I find the reconstruction of the Fortress of Knowledge exceptional for two reasons: firstly, we have managed to complete the construction according to the original concept, despite all the hardships caused by the original contractor who ended in insolvency and quit the job; and secondly, it has become a very lively place. In my opinion, it results from the programme and the activities included in the museum as well as from the uniqueness of the building as such, its unmistakable genius loci, which was successfully preserved from the past times and interconnected with the modern function of an interactive science museum,” said Jana Zimová, the Faculty of Sciences secretary.

This is the seventh time the Olomouc Region has awarded its best buildings. Eligible were buildings realised in the region and officially opened no later than December 31, 2016. “One of the goals of the competition was to make the public aware of the qualities of contemporary building construction, architecture, and architectural design in the region. We also hope to support all architects, construction companies, and investors who change the face of the region for the better,” said region president Ladislav Okleštěk.