Palacký University Olomouc is the second oldest university in the Czech Republic. Its tradition reaches back to 1573, when the former Jesuit College gained privileges equal to those of other European universities, granted by Maximilian II, Holy Roman Emperor. The university consisted of two faculties at the dawn of its history, providing education in Liberal Arts and Theology. University education itself started three years after the foundation of the university, in 1576, when the Englishman George Warr started to lecture on Philosophy. That same year, the first students were officially enrolled in the university’s registry. The university gained recognition outside the Czech Lands, and its sphere of influence extended from Moravia and Silesia, over to Poland, Hungary, and the Austrian lands, to Germany, Scandinavia, and Eastern Europe. However, during the Bohemian Estates Revolt (1618–1620) the Jesuit Order was driven out of Moravia and the university temporarily ceased operations. It was again restored in 1621 after the revolt was crushed.

The Thirty Years' War (1618-1648) marked one of the darkest periods in the history of Olomouc. The city was occupied for eight years by the Swedish army under the command of General Torstensson. It was plundered during the occupation, and there were even proposals to level it to the ground. The university's vast library was pillaged; as a result, its most precious relics were relocated to the National Library of Sweden in Stockholm, including the Olomouc Collectarium from 1142, a book of codices made in the illuminated scriptorium of the Bishop of Olomouc, Jindřich Zdík [Henricus Zdico].

After the Swedish troops departed, the university started to flourish. The Jesuits commenced an extensive construction programme, building a series of imposing Baroque buildings for the Order (a new edifice for the college) as well as the university itself (two convictoria, a school building, the Church of the Virgin Mary of the Snows, the Seminary of St Francis Xavier). A number of scientific disciplines were taught at the university with success, particularly Mathematics, Physics, Cartography, and Hebrew. The notable scientists associated with the university at that time include such famous personas as the Jesuit mathematician Jakub Kresa (the "Euclid of the West"); the father of modern genetics, Gregor Mendel; and the astronomer Karel Slavíček, who was employed by the Chinese emperor. Lectures in Astronomy were given by the Jesuits Valentin Stansel and Jan Zimmermann.

The development of the university was hindered in the aftermath of the suppression of the Jesuit order at the end of the 18th century. With the Society of Jesus being dissolved in 1773, the university was turned into a secular institution run by the state. Due to the status of the city of Brno as the capital of the Margraviate of Moravia and flaws in the management of the university, it was relocated to Brno on May 24, 1778. However as early as September 12, 1782, the university was relocated back to Olomouc on the basis of a decree issued by Emperor Joseph II. Its status was downgraded to that of a three-year Lyceum, because the Emperor decided to retain only the universities in Vienna, Prague, and Lvov (Lviv). The study of medicine and surgery became a separate field, in which surgeons and obstetricians' assistants were taught.

Attempts to restore the Lyceum to full university status finally succeeded in 1827, when the Cardinal Archbishop of Olomouc, Rudolf Johannes von Habsburg-Lothringen (brother of Emperor Francis II), persuaded the Emperor to promote the Lyceum, which now became Francis University, with Faculties of Philosophy, Theology, and Law, and the School of Medicine and Surgery.

In 1851, growing government intolerance of dissent and the subsequent decline in student numbers led to the closure of the Faculty of Philosophy. The Faculty of Law was closed at the start of the 1855/56 academic year and in 1860 Emperor Franz Joseph I closed virtually the entire university. Only the independent Faculty of Theology remained open (until after the German invasion, when all the Czech universities were closed in November 1939), whereas the existence of the School of Surgery was short-lived (closed after the 1873/74 academic year). Olomouc University's regalia were transferred to the Leopold-Francis University of Innsbruck, which donated a copy of the original Olomouc University Rector's Mace to Palacký University in 1998. On 21 February 1946 the Olomouc University was re-established as Palacký University (named after the historian František Palacký) and comprised of four faculties: Theology, Law, Medicine, and Philosophy. The Restoration Act was however not fully carried into effect, since the Faculty of Law was opened only forty years later, after the Velvet Revolution. On the other hand, the Faculty of Education was affiliated after its establishment, also in 1946.

The first rector of the re-established university was the philosopher and sociologist Josef Ludvík Fischer. His very progressive vision entailed the creation of an elite university open to the world. The realisation of his ideas was hindered due to the Communist takeover in February 1948. The academic community was persecuted and the very existence of the university was in danger. These events had fatal consequences for the Faculty of Theology. The attempts for reforms in the 1960s and during the Prague Spring failed likewise. The stability and development emerging in the 1960s were terminated by the Normalisation of the 1970s, which had very negative consequences for the entire educational system. The original concepts and the content of the curriculum – particularly in the humanities – were once again deformed. This unfortunate era ended with the Velvet Revolution in 1989. 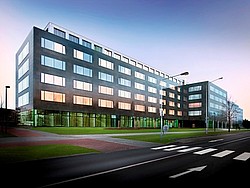 Palacký University departments, institutes, and offices are housed in many beautiful historical buildings in Olomouc. Its location in the midst of such a historical monuments preserve simply gives studying at Olomouc's university an inimitable character. The university is at the turning point of its development, as the historical buildings begin to lack necessary capacity. Intensive construction on new facilities for education, science, and research are in progress. In the past few years, new prestigious research centres have been opened in order to bridge scientific research to practical applications.

The first addition was the modern compound of the Faculty of Science at the Envelopa site in 2009, at a cost of €40 million. Thanks to EU financial support, five science and research facilities have been built since 2011: the Centre of the Region Haná for Biotechnological and Agricultural Research, the Regional Centre of Advanced Technologies and Materials, the Research and Education Centre at the Faculty of Education, the Institute of Molecular and Translational Medicine, and the new compound of Theoretical Institutes at the Faculty of Medicine and Dentistry. The EU also contributed to the construction of the Fort Science, an interactive centre for popularisation of science among children and youths. A new building was opened at the Faculty of Education. The faculty obtained a modern auditorium, laboratories, classrooms as well as a cutting-edge data centre. The new compound houses the Typhlopaedia Laboratory and also the Logopaedia Laboratory, one of a kind in the Czech Republic.

In 2016, the UP Faculty of Physical Education opened the BALUO Application Centre in the Neředín campus – a unique scientific centre whose aim is the support of a healthy lifestyle and the prevention of civilisation diseases. The core of the complex is its diagnostic studio with state-of-the-art devices for determining body dispositions, and swimming pools equipped with recording devices enabling the analysis of the swimmer’s movement. There is also a unique indoor ski slope.

In January 2021, a new university institute was launched – the Czech Advanced Technology and Research Institute (CATRIN), which was created by integrating the scientific teams of the Centre of the Region Haná for Biotechnological and Agricultural Research, the Regional Centre for Advanced Technologies and Materials, and the Institute of Molecular and Translational Medicine. The new institute interconnects scientific research capacities in the fields of biomedical research, nanotechnologies and new materials, and plant research.