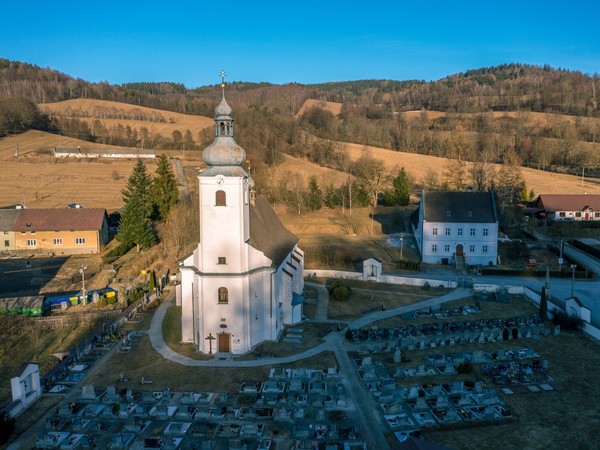 A group of volunteers has decided to save the pipe organ in the Renaissance Church of St. Laurence in Sobotín, in the Šumperk region. Among those not indifferent to the fate of this musical instrument from the end of the 19th century is Karel Hron, former Vice-Dean for External Relations at the UP Faculty of Science, together with his successor, Ota Blahoušek. Hron, who is a statistician, participated in the creation of a new church website, designed by Daniel Bazala and Ivo Šmerek, students of the Department of Computer Science at the UP Faculty of Science. Biologist Ota Blahoušek then shot a promotional video about the church and the pipe organ. On the website, people can contribute to the repair of the organ by adopting one or more of its 400 pipes – the amount of the financial contribution depends on the pipes’ size.

“The organ in St. Laurence’s Church in Sobotín is a valuable pseudo-baroque instrument from the end of the 19th century, built by the important Moravian organ company of the Brauner Brothers from Uničov. It is preserved in almost the original condition, which, however, now urgently requires reconstruction due to the overall wear and infestation by wood-destroying insects,” said Hron.

According to him, the Sobotín pipe organ is one of the few preserved instruments of the Brauners in its original and functional state and is characterised by a number of unique technical and aural solutions. “They made exceptionally high-quality romantic one-manual pipe organs with a pedal. Their sound side is especially valuable,” he said.

Historical associations with the witchcraft trials

Although the village of Sobotín has only a little over a thousand inhabitants, it boasts a rich history. The Klein family, who owned one of the largest ironworks in the Austro-Hungarian monarchy in the second half of the 19th century, is indelibly inscribed in the village’s history. “No less interesting, although mostly turbulent, is also the history associated with the St. Laurence’s Church, which has been protected as a cultural monument since 1958,” said Hron.

It was an event in the church in Sobotín on Palm Sunday in 1678 that unleashed the infamous witch trials in the Moravian lands. And at the end of World War II, several dozen citizens were massacred by Russian soldiers in and around Sobotín. Only a few days later, twenty-nine-year-old nun Marie Paschalis Jahn lost her life at the hands of a Red Army soldier when she refused to submit to him. “She is buried right in the cemetery that surrounds the church. Last year, Pope Francis signed a decree recognizing her martyrdom and that of nine other nuns who suffered a similar fate,” added Hron.

An important event will take place in the Sobotín church this June. On Saturday, June 18, at 2 pm, a votive mass will be held to bless Marie Paschalis Jahn, whose beatification is set to take place just the week before in Wrocław. The celebrations will also include a benefit concert on the national holiday commemorating Victory in Europe on 8 May at 4 pm, with the participation of members of the Moravian Philharmonic Orchestra and the Moravian Theatre in Olomouc with Jan Gottwald, organologist and choir director at the basilica minor on Svatý Kopeček near Olomouc.

“Because this concert, which is combined with the opportunity to contribute to the repair of our valuable Sobotín pipe organ, was planned long in advance, we had no idea how current and important it would be at this time to be reminded of the horrors of war and the price of purity of conscience,” said Hron. The Roman Catholic parish priest Milan Palkovič, who has been behind the overall restoration of this church monument, equates efforts to reconstruct the organ in connection with another important role of the Sobotín church: “If the resting place of our ancestors looks attractive, and we can admire it not only with our eyes but also our ears, then it is a sign that we have some understanding of what cultural and spiritual heritage is.”