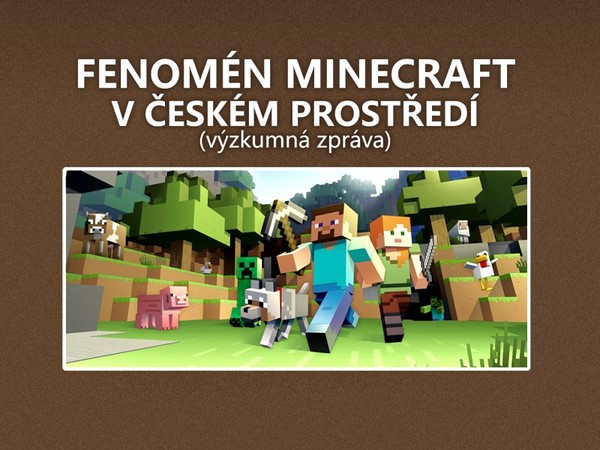 The Centre for Prevention of Risky Virtual Communication at Palacký University Olomouc investigated the popular computer game Minecraft and its influence in the child population. In the Czech environment, the research called The Minecraft Phenomenon took place in cooperation with Google and Vodafone. More than 2,300 active, mostly child players from all regions of the Czech Republic, participated.

Minecraft is a very popular computer game among Czech children. It offers children as well as adults an open environment with a large number of gameplay options and a sophisticated ecosystem. The game allows children to realise their ideas and dreams, offering space and time for active relaxation, educating them in a way as well.

“The game focuses primarily on children’s creativity and its development, it inspires children and provides a space for self-expression, promoting cooperation between players and developing the imagination of children. In this sense, it can be evaluated clearly positively. However, the game is so attractive to children that it is capable of consuming all of their free time quite quickly, suppressing other activities,” adds Kamil Kopecký from the Centre for Prevention of Risky Virtual Communication at Palacký University Olomouc.

The results of several months of research have shown that children spend an excessive amount of their free time playing the game. According to the results, 23.68% of child players play Minecraft for more than 11 hours a week, 13.73% play the game for more than 16 hours a week. More than 44% of players play Minecraft every day – children do not distinguish workdays or the weekend. Based on the answers of children, more than half of parents (61.18%) limits their game time. The research has also shown that more than half of players (51.69%) were introduced to the game by friends who also play Minecraft. They most often play the game with these friends. Approximately every fifth Minecraft player (23.12%) captures their gameplay, however, only 14.03% share their videos with other players.

As in other online environments, also in Minecraft, quite a large number of players become a victim of different types of cyber aggression that can have serious or less serious forms.

The most common form is so called griefing. This means that someone destroyed their creations in Minecraft. Players are quite often confronted with common types of verbal aggression, including swearing and insults, reported by 31.93% of players. Threats were confirmed by 16.64% of child players, 11.25% of players experienced blackmail.  The research also implies that 6% of children experienced situations, where one of the other players recorded them in the game and then used the video to mock them in public, 5% of players also reported that other players asked them for a picture in which they would be partially or completely naked.

“A very positive outcome is that more than 41% of players reported they have not encountered any risk form of communication or risk communication phenomenon in the Minecraft environment. Minecraft is, therefore, an environment that is essentially very safe. Research has shown that situations, where children encounter serious forms of cyber aggression, are rather rare and are not typical for this game,” says Kamil Kopecký. Approximately 16% of players think they are addicted to playing Minecraft. According to Mr Kopecký, this is not a case of actual destructive addiction, but rather an example of addictive behaviour.

“There is a number of effects associated with the the excessive playing of the game that occur in child players. For example, 28.23% of players reported they have lost control over time spent playing Minecraft, 22.40% has experienced burning eyes, 21.68% reported back pain, players also report pain in the hands, wrists, headaches, growing tolerance to gaming, disruption of daily schedules, eating disorders, blurred vision, sleeping disorders,” says Mr. Kopecký. This is why the research results also include the recommendation to set gameplay time limits for children.

“The critical role of parents is very important as well as their ability to pay adequate attention to activities of their children in the online and digital world. Virtual reality presents risks and opportunities just like the real world. A good digital parent can protect their children even on the Internet and does not rely on the fact that nothing can happen to children while sitting at a computer,” sums up Pavel Košek, Public Affairs Manager at Vodafone, Ambassador to the Digital Parenthood project.

According to Pavla Grigarová, Marketing Manager at Google for the Czech Republic and Slovakia, user safety has always been the top priority for the company. “Our long-term focus has been to increase safety not only in terms of services but also in other educational projects. We have therefore supported the activity of the Centre for Prevention of Risky Virtual Communication at the Faculty of Education at Palacký University Olomouc. It will help to make the Internet and online services safer for everyone, says Pavla Grigarová.

Detailed information about the Minecraft Phenomenon research in the Czech environment is available in the research report at www.e-bezpeci.cz.