Scientists have developed cheap and available material for supercapacitors 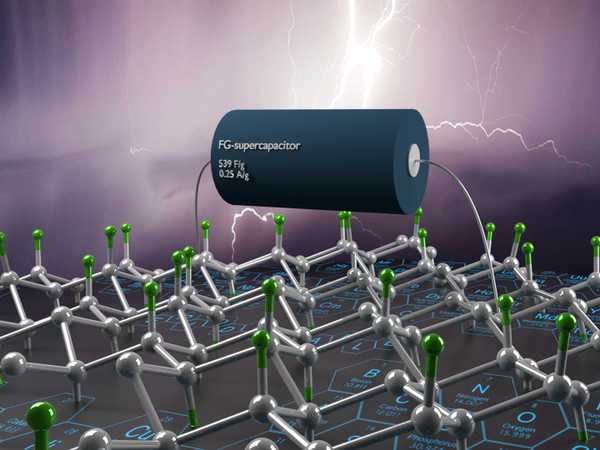 A new carbon electrode material suitable for supercapacitors, that is, energy storage devices used for example in the automotive industry or electrical engineering, has been developed by RCPTM scientists. This fluorographene-based material has comparable capacity to commercially used materials; however, it’ is much more affordable and accessible. The results of roughly two-year research were described by the authors in an article published recently in the journal Nanoscale.

The researchers used fluorographite, a commonly available industrial lubricant, to prepare an electrode material. In a hydrogen atmosphere, they defluorinated and partially hydrogenated it at an elevated temperature. “Thanks to the elevated temperature, some of the fluorine atoms detached from the original material and were replaced by hydrogen atoms in a reduced hydrogen atmosphere. With respect to this, the conductivity of the material changed as well. We further optimized the reaction time. We found that after 20 hours of heating, the material reached its optimal composition and yielded the best capacity properties,” said one of the authors Petr Jakubec.

Conductivity ranks among the key properties of suitable electrode materials for supercapacitors. Another important feature of supercapacitors is the maximum number of charging cycles without loss of capacity. In this regard, as well, the new material has very promising parameters. “We carried out 30,000 cycles of repetitive charge and discharge without observing a drop in capacity. Compared to the literature, such a performance is exceptional. Commonly reported numbers for similar materials are one to 10,000 cycles; everything that goes beyond is interesting,” Petr Jakubec added.

Scientists at RCPTM have been developing new materials for supercapacitors for several years. What they have been particularly focused on are other materials having better properties and lower price.   “In this case, the possibility of commercial use is guaranteed by reasonable price and simple preparation. This is due to not only a readily available starting material, but also a simple and single-stage synthesis. There is no need for complex solvents, heavy metals and inert environments. While testing the supercapacitors, we used as an electrolyte an aqueous solution of commonly available and cheap sodium sulphate, which is, like fluorographite, available on the market in tonnes,” explained another author of the study Martin Petr.

The research was part of an ERC grant called Two-Dimensional Chemistry Towards New Graphene Derivatives, which is solved by a team led by Michael Otyepka. It aims to prepare graphene-derived super-functional materials whose properties are tailored to specific applications. It is the area of “storing” electricity that seems very prospective in this regard.