Researchers Described What Happens Inside the Carnivorous Sundew Plant 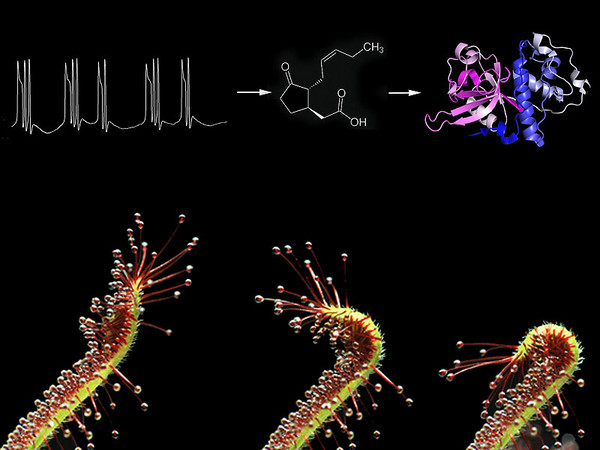 Scientists from Centre of the Region Haná for Biotechnological and Agricultural Research in Olomouc have brought a new view on plants and their ability to sense their environment. For the past two years, they have been looking inside the carnivorous sundew plant (Drosera capensis) and compared its electrical activity and physiological response after both prey capture and physical wounding. They found that the response is very similar, and that botanical carnivory has probably evolved from plant defence mechanisms. The paper was published in the respected journal New Phytologist.

The object of the study was the carnivorous sundew, which captures insects by sticky tentacles. The plant was exposed to different stimuli and researchers studied the subsequent reactions which were initiated by the generation of electrical signals. In the past, research on electrical signalling in plants has been neglected, but Olomouc biophysicists have had long-standing experience with it.

The electrical signal was the key

“We have shown that the electrical signal stands in the first line in the plant’s ability to perceive its environment. In this article we have described the whole process, from generation of an electrical signal to final response. The main objective was to compare electrical signalling and physiological response after both feeding and physical wounding. We wanted to know if the plants can distinguish two different types of electrical signals,” says Andrej Pavlovič, corresponding author of the study from the Department of Biophysics at Palacký University in Olomouc.

First, the researchers studied plant behaviour after prey capture. After the prey is captured, the tentacle heads, which are in contact with the captured prey, start to generate electrical signals which spread toward the base of tentacles. Inside the leaf, the signals are changed into electrical vibrations. These are sensed by the neighbouring tentacles, which start to bend inward and fix the insect prey.

“This rich electrical activity is confined to the area with the captured insect. In this area, the plant phytohormones from the group of jasmonates start to accumulate and trigger the enzyme activity only in this part of the leaf. We analysed the digestive fluid and found the proteins which digest proteins, chitin or RNA. All these substances contain a lot of nitrogen and phosphorus. The plant needs to obtain these elements to improve its photosynthesis,” specified Pavlovič.

A very similar response was found after physical wounding. The injured plant generates a completely different type of electrical signal in comparison to the signal generated after its prey captured, and in this case, the signal spreads to all leaves. As a result, production of jasmonates and digestive enzymes is increased in all the plant leaves. “We do not know yet what the purpose of this behaviour is. Why does the plant produce digestive enzymes when there is nothing to eat? We suggest that it is a result of evolutionary history, when ordinary plants used, as they do today, electrical signals and jasmonates for initiation of a defence response. The digestive enzymes are very similar to defence proteins. Carnivory has probably evolved from plant defence mechanisms,” concluded Pavlovič.

The plant can taste its prey

“The experiments have shown that the plant cannot recognise different stimuli and electrical signalling is not very specific. However, the plant can taste its prey. As soon as the plant tastes the chemical components of its prey (e.g. ammonia), the secretion of enzymes increases tenfold. Thus, the plant has mechanisms to distinguish food from indigestible particles,” Pavlovič said.

Biophysicists, plant physiologists, analytical chemists, biochemists and cell biologists from four departments of the Faculty of Science at Palacký University in Olomouc and Comenius University in Bratislava participated in this research. Thanks to this co-operation the result is very complex. The complex approach was appreciated also by Axel Mithöfer from the Max Planck Institute for Chemical Ecology in his commentary in the same issue of New Phytologist: “This study represents a milestone for our understanding of carnivory in sundew plants….” Olomouc scientists will continue to unravel the secrets of carnivorous plants, which Charles Darwin considered the most wonderful in the world.