Railway corridor between the Czech Republic and Ukraine: Where UP students are playing a big role 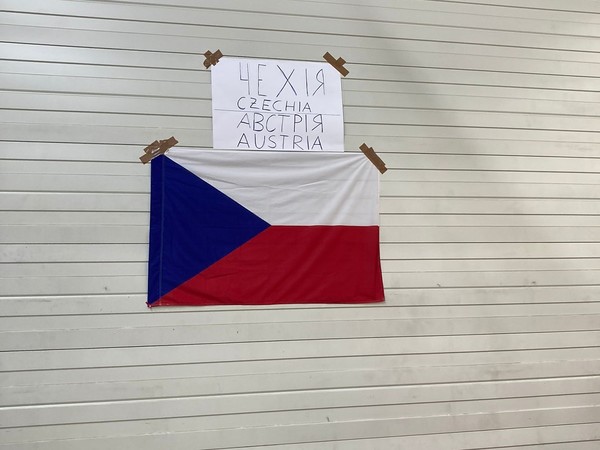 Trains are leaving daily for Ukraine, in order to take those who are fleeing the war out. Crowds of refugees of all ages gather in the Ukrainian-Polish border town of Korczowa, Poland and from there go to Przemyśl, where they try to get onto evacuation trains. And in those trains, a lot of work is being done by volunteers from Palacký University, students who speak Ukrainian and/or Russian.

A working weekend practically without sleep, without clear instructions, but nonetheless with a clear goal: to get Ukrainian refugees to safety. That’s the basic idea of the humanitarian railway corridor between the Czech Republic and Ukraine, where students of the UP Faculty of Arts are helping out in a big way.

Michaela Magdalena Kočovská, a student of German and Russian at the UP Faculty of Arts, described the situation. “On Friday in Olomouc, I boarded a RegioJet evacuation train sometime around midnight. We arrived in Przemyśl, Poland about seven am. Then we waited there, abandoned, for about four hours until a bus came to take us to the centre in Korczowa. This is the place where refugees from all parts of Ukraine are gathering. People are resting up there in a huge station hall, they can eat, drink, and pick something out of donated clothing. The hall is the place where the refugees find out where they will be going. It’s a place where people are also offering transport to various countries.”

She helped with the evacuation of refugees mainly as an interpreter. “In the centre of the hall is a place where people announce their requests, for example where they would like to relocate. They also receive information as to where they can actually go,” she added. The students’ basic task was to inform people about the possibilities of where they could take refuge in the Czech Republic, and to explain and interpret in every “free” moment.

“Those who have decided to travel to the Czech Republic take their bags and sometimes even pets onto special busses to Przemyśl, where they can get on the evacuation trains,” said the volunteer. During that weekend about one hundred fifty people gathered at the Przemyśl station, where her task remained the same. She interpreted countless questions and answers. Primarily about visas, and what refugee status means in the Czech Republic

“For the majority of people, lots of things were incomprehensible without explanations. Many of them worried that they wouldn’t have any freedom in a foreign country, that it would be like living in a prison. Some of them were obviously in great distress – due to the journey they have had to go through, due to the whole current situation. There were people there that really had only the one backpack and had been travelling already for several days,” she added.

The train to the Czech Republic left on Saturday, sometime after 10 pm. It stopped in Ostrava, Olomouc, Pardubice, and Prague. People received free blankets and refreshments. For the two interpreters, Michaela and her colleague – there were just the two interpreters on a trainload of one hundred fifty refugees – the work did not let up. They even helped serve dinner. And again gave explanations and responded to questions. During the trip she had to really try to persuade refugees to disembark elsewhere than Prague, as its housing capacity is already full. She did it with the knowledge that where exactly housing possibilities might be found was not actually known. The situation is constantly in flux.

“That was so stressful. Constant telephoning to ask where there might be space for refugees. You’re transporting people but you don’t know where to. You have to find out everything on the way,” the UP student described.

When a group of people got off the train a little after 6 am in Olomouc on Sunday, her shift was nearing its end. She took the group to the Regional Assistance Centre to Aid Ukraine (Krajské asistenční centrum pomoci Ukrajině: KACPU), where she also works as an interpreter, by the way. After her trying evacuation shift, she handed over the job to other student volunteer interpreters.

The working weekend described was demanding for volunteers – both physically, and psychologically. The next weekend showed that the weekend before was only a prelude to what was in store for her:

“Unfortunately, at the same time there was a cyber-attack on Poland, which disrupted part of the infrastructure there for a while. This created an unbelievable crowd of people who were totally exhausted and beat – and who all wanted to squeeze into our train. It didn’t matter to them where it was going or whether there were any seats. People were panicking so much that they were incapable of rational thought and stampeded the train. They were crying, yelling, fighting. Survival of the fittest. Human dignity was being painfully trampled upon. It was a horrible demonstration of what fear can do to people, what war does to people. So unnecessary. So senseless….”