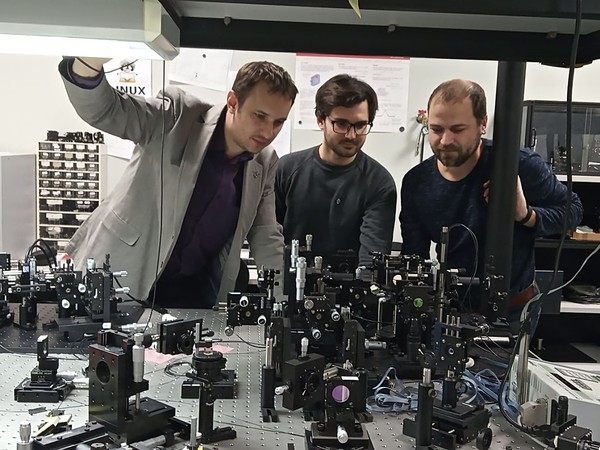 A unique quantum ruler, which in the future would significantly increase the computational speed of artificial intelligence and also improve the security of quantum communication, has been experimentally constructed with success by scientists at the Joint Laboratory of Optics of the UP Faculty of Science and the Institute of Physics of the Czech Academy of Sciences. The study of quantum states from the point of view of their practical use in machine learning took two years. The results of their research were published in the prestigious journal Physical Review Letters.

According to experts from the Joint Laboratory of Optics, this is an instrument which would make possible measurement of the distance between quantum states in their abstract space. “While in the real world, classical rulers measuring the distance between two points such as a metre are used, quantum states exist in a relatively abstract space. Measuring their distance in the quantum world is thus not easy,” stated Antonín Černoch.

Quantum states are expressed via Hilbert-Schmidt distance. “And thus the idea for effective measuring of the distance in this space came to our colleague Karol Bartkiewicz. The principle is based on the direct interaction between quantum states, in order to avoid the tedious technique of quantum tomography used to date. We were searching for ways to implement theoretic ideas in the lab so that they would be demonstrable, to show that it can work,” remarked Vojtěch Trávníček, the study’s lead author.

Thanks to this, a quantum ruler could be used for example in the area of algorithms and techniques which could allow a computer system to “learn” and become artificially intelligent. “In machine learning, studied objects are usually transformed into a complex system of parameters, mathematical vectors, between which there is a subsequent need for distance measuring. This is a difficult task for classical computers. Our approach allows these vectors to be written into quantum states and then one simply ‘uses the ruler’. In doing so, we are able to speed the key algorithms of machine learning by a quite significant extent,” added Karel Lemr, of the Joint Laboratory of Optics.

A quantum ruler can also strengthen the security of modern communication based on quantum cryptography. “Quantum cryptography is not one hundred percent secure, for a potential attacker could hide in the white noise which is a component of every communications channel. The security can be assessed by measuring the distance between the quantum state at the entry point of the communication channel and the quantum state at the exit point. Thanks to this, we are able to determine whether or not the communication channel has the potential to be secure. If the difference is significantly large, then the link cannot be used for clandestine coding,” Lemr warned.

Results of their scientific work, in the form of an instrument to measure the distance between quantum states, will be the focus of further research.