Olomouc researchers investigate if seeds have an “Achilles’ heel” 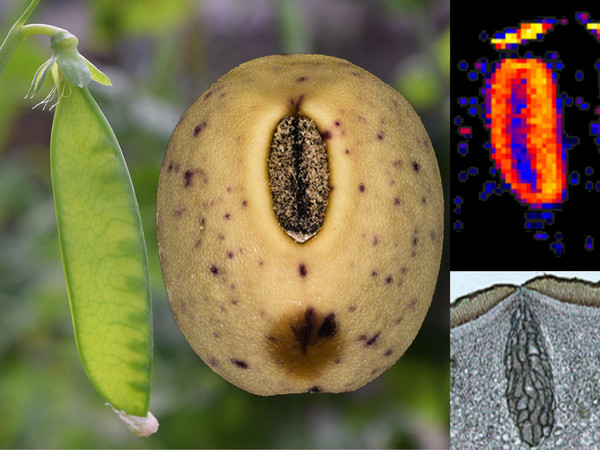 Although the domestication of wild peas has increased their utility value for humans, it has had a negative impact on the seeds’ resistance to adverse external influences. In fact, the function of the enzyme polyphenol oxidase (PPO) in pea seeds has been significantly impaired by domestication. This enzyme plays an important role in the protection of the pea seed and its dormancy, i.e. its ability to wait in a latent state for an external signal to trigger germination. The gene encoding the PPO enzyme, which is typical of wild peas and, conversely, dysfunctional in domesticated variants, was identified by a group of scientists led by Petr Smýkal from the Department of Botany at the Faculty of Science. The results of their joint research were published in the prestigious journal New Phytologist.

“Together with colleagues from the Department of Analytical Chemistry, the Department of Biochemistry and other workplaces, we were able to discover the function of this unique gene and enzyme. The obtained data show that both the amount of transcriptomic, proteomic and metabolemic activity of PPO are higher in the seeds of wild peas and, conversely, reduced in representatives of cultivated peas. The PPO gene functionality has been shown to be related to oxidation and polymerization of phenolic substances in the seed coat and especially to hilum pigmentation, which is a remnant of the connection with the mother plant through the loop used to nourish the developing embryo,” said Smýkal.

According to the researchers, the presence of characteristic phenolic precursors together with sufficient PPO activity led to dark coloration of the seed hila, which is typical for wild peas. “On the other hand, single-nucleotide insertions in the PPO gene sequence leading to its dysfunction were associated with light hilum coloration in 75 percent of cultivated pea samples,” said Smýkal.

According to him, during the gradual domestication of wild peas, a non-functional allele of the PPO gene was probably selected. However, it is not yet clear why this happened. One possible explanation is that the resulting polymerised phenolic substances in tannins are bitter, so they negatively affect the palatability of the seeds. The preference for the absence of dark pigments in the seed could also be a reflection of the influence of a cultural preference for white as a symbol of purity.

“Interestingly, non-functionality of polyphenol oxidase has been preferred repeatedly during domestication, for example in rice, and partially in barley and millet. This is despite the fact that it may be associated with some disadvantages in defending against pathogens, since polyphenolic substances are closely linked to seed defence. Our study is the first of its kind in legumes, and has opened a number of questions that will stimulate further research,” added Smýkal.

Once the seeds are separated from the mother plant, they have to survive in an inhospitable external environment and deal with a number of dangers, most notably the diverse group of pathogens. The seed coat – which contains a number of specific substances, mainly phenolic compounds and enzymes – plays a crucial role in the seed’s defence. “We managed to prove that PPO activity is necessary for the oxidation and polymerisation of selected phenolic compounds in the wild pea seeds, which is mainly manifested by hilum pigmentation, which we believe may represent the ‘Achilles heel’ of seed defence,” summarised Smýkal.

Detailed direct imaging analyses using high-resolution tandem mass spectrometry were very useful for researchers in this study for describing the differences in metabolite distribution in seeds. “Techniques and methods for these analyses are being systematically developed at our workplace. The collaboration with Petr Smýkal’s group from the Department of Botany is long-standing and mutually very inspiring,” said Petr Bednář from the Department of Analytical Chemistry.