Olomouc Majáles revives Czechoslovakia: musician David Koller is the King of May 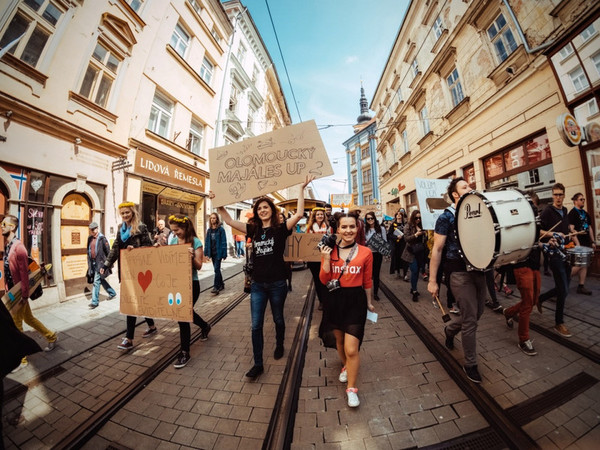 On Wednesday May 9, the Olomouc’s Upper Square and Bezruč Park will become a playground decorated in the Czech national colours – red, blue and white – for children and adults alike. The Olomouc Majáles, the traditional May student festival organised by Palacký University, will take place there in the spirit of the motto “ČeskosLOVEnsko – 100 Years Together”.

The Majáles programme will feature popular Czech and Slovak bands such as Tata Bojs and Puding pani Elvisovej, along with artists such as Iné Kafe’s frontman and this year’s King of May, David Koller. Theatre, discussions, exhibitions and interactive presentations of dozens of student and non-profit organisations will also take place.

Programme for the whole family

“Just like in previous years, the traditional celebration of the spring in the beautiful environment of Bezruč Park will offer a programme for all age categories, not only students,” underlines Ondřej Martínek, the main coordinator of the event. The range of events is wide, from arts workshops and a marionette show for children, to a theatre play for seniors, a film projection about life in the 1970s and 1980s, and a comics exhibition on the history of the twentieth century.

“In addition to that, we have prepared several novelties, such as the molecular bar, an escape game in a former fallout shelter, two thematic fashion shows, and a discussion on music with musicians, Milan Cais from Tata Bojs and Vratko Rohoň from Iné Kafe,” adds Martínek. The genre variety in the music programme is the main asset of this Czechoslovak May fest. Czech music will be represented by the bards from Tata Bojs, the “Czech Ed Sheeran” Jakub Ondra, the wild Circus Brothers, nu-jazz Lesní zvěř, and swing Orchestr Ježkovy stopy, while Slovak highlights will be the electropop Puding paní Elvisovej and the singer and songwriter from the Iné Kafe band, Vratko Roháň, who will present their immortal songs in an untraditional unplugged version.

The Olomouc Majáles will be commenced, as the custom goes, by an allegorical procession through the town and the coronation of the King of May – this time the musician, composer, and producer David Koller. “This year’s king has a more difficult role than ever. Not only he will have to rule over two sovereign nations; his reign will also be supervised by other EU countries, since Europe Day will be simultaneously celebrated on the Upper Square, due to our cooperation,” specifies Lucie Kačerová from the organisational team.

The whole procession will then head to Bezruč Park, where Majáles will be commenced, followed by the concert of the 12-member Orchestr Ježkovy stopy, featuring the work of jazz musicians Jaroslav Ježek and Jiří Traxler. One of the novelties are programme blocks in Fort Science, where debates and film projections will take place, while the Jazz Tibet Club will host two benefit concerts. The charity, an inseparable part of every year’s Majáles, will be related to the theme. “The voluntary admission and contributions will be handed to the Olomouc branch of the organisation Memory of Nations, which will use it for the production of documentaries with the witnesses and active participants of the revolutionary year 1989 in Olomouc,” says Martínek.

Tug-of-war over the borders

An abundance of accompanying events will be held in the park. The theatre tent, for instance, will stage an impro match between Czech and Slovak teams and a theatre play “Wild Stories” by the Tramtarie Theatre; historians recommend the tug-of-war over Czech and Slovak borders, whereas sport organisers offer dozens of outdoor activities. “Our programme includes a presidential election, with candidates being all Czech and Slovak presidents since 1918, and a photo stage where visitors can take pictures sitting in a Škoda Felicia from 1960,” adds Kačerová.

The UP Olomouc Majáles was founded eight years ago and is organised by Palacký University Olomouc. It is a non-profit event, made possible every year thanks to the efforts of dozens of volunteers from UP’s eight faculties. The festival is committed to the support of academic values and civil society. The entire programme is free of charge and offers opportunities for all age groups. The main partners of the event are the City of Olomouc, the Olomouc Region, and the exhibition organisation Výstaviště Flora Olomouc.