Oldest cave drawing in the country found in Catherine’s Cave 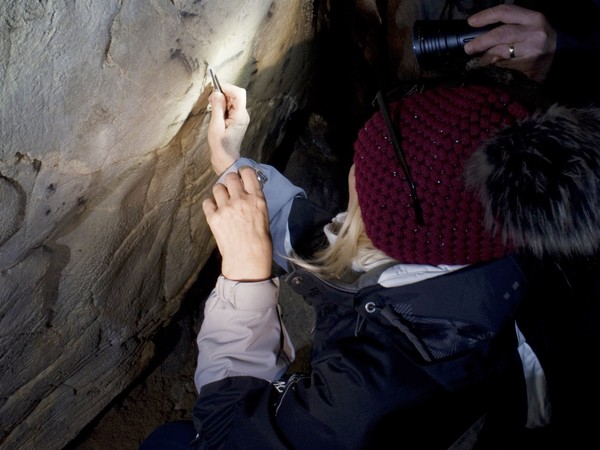 Martin Golec from the Department of History at the Palacký University Olomouc Faculty of Arts, Petr Zajíček from the Cave Administration of the Czech Republic, and Ivo Světlík from the Nuclear Physics Institute at the Czech Academy of Sciences have announced a unique discovery. They have determined that Catherine’s Cave in the Moravian Karst contains the oldest cave drawing in the Czech Republic. The origin of the geometrical patterns, made by charcoal on the walls, was determined by radiocarbon dating to be more than six thousand years-old.

There are more than one thousand caves in the Moravian Karst, and five of them contain numerous relics, especially signatures of people who used to enter the caves from the sixteenth to the nineteenth centuries. These caves have been the object of interest for a team of scientists in their research of cave drawings supported by the UP Internal Grant Agency.

“I have been studying the Moravian Karst since 2007, and the signatures of people, mostly tourists, who visited the caves, start in the eighteenth century. However, in Catherine’s Cave, we found among them a group of lines that differed. Our suspicion that they originate from a different era was confirmed by radiocarbon analysis,” said Martin Golec from the Department of History. The analysis revealed that the drawings located in Catherine’s Cave are the oldest in the Czech Republic. They were created in the Early Neolithic age, 6200 years ago.

“Carbon-14 dating with low-mass samples is a great contribution for archaeologists. Ivo Světlík from the Nuclear Physics Institute significantly helped our discovery by enhancing the method of taking cave drawing samples. The samples gathered on a piece of cotton wool soaked with a special solution were cautiously prepared for measurements in a special device and sent to Debrecen, Hungary, for final measurements. The loss of radioactive carbon can be used to measure the period when the work was created. The new method of extraction damages the drawings to a minimal extent, which is very important in terms of their protection,” the UP archaeologist added.

The meaning of the paintings, however, remains unclear. Their location deep in dark recesses, on prominent protrusions and crevices, may be explained as a way of marking the place where spiritual rituals related to higher entities occurred. Martin Golec rejects the idea that they might have been made by a person who was idling with a piece of charcoal. He believes that their author saw something deeper behind every structure of the pattern; however today’s science simply cannot decode their meaning.

This unparalleled discovery will become part of a Bachelor’s thesis by Lucie Minaříková, whose adviser is Martin Golec. The data will be subsequently published in various journals; scientists hope to publish their extraordinary findings in the prestigious British journal Radio Carbon.

“It is beyond belief. Every year, up to 70 thousand visitors visit Catherine’s Cave. Generations of scientists and tourists have been passing by these six-thousand-year-old paintings without taking any notice,” the UP archaeologist added.