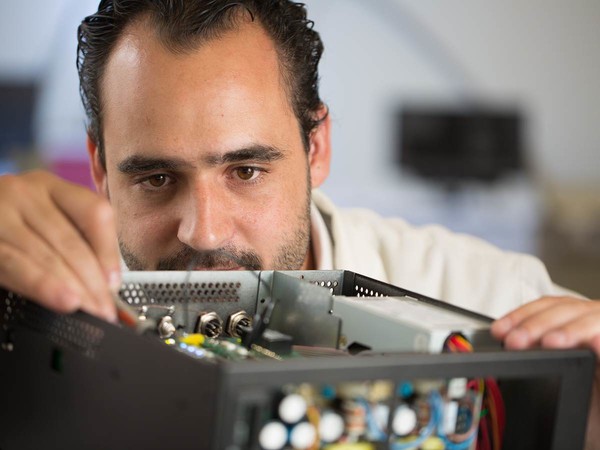 Palacký University Olomouc (UP) has taken a major step towards the commercialisation of the fourth-generation of Mössbauer spectrometers—instruments for analysing materials containing iron or iron oxides—developed by its scientists. Their manufacture, sale and servicing will be handled by a private spin-off company Iron Analytics under a licencing agreement. Among other things, the university will receive a share of each machine sold, whose average price can be half a million Czech crowns.

“The joint objective of the university and the newly formed spin-off company is to streamline the commercialisation of fourth-generation Mössbauer spectrometers. The university is the originator of both the idea and the technical solution; however, it is not its mission to directly provide and develop their production and sale. Spin-off companies are in general much more suitable for transferring research results into practice. Although they’re entering the market at a rather slow pace, compared to abroad, spin-offs are one of the most effective ways to ensure the transfer of knowledge from academia to practice,” said the Director of the Czech Advanced Technology and Research Institute—CATRIN UP, Pavel Banáš, who signed the licensing agreement for the university since these spectrometers are designed and manufactured there.

“On the basis of a transparent licensing agreement, preceded by a feasibility study carried out outside the university, alongside a conflict of interest agreement and expert opinion on the price of the licence, we can benefit from the university’s know-how, i.e., we can manufacture, sell and repair fourth-generation Mössbauer spectrometers. Since the university has so far managed to sell a few pieces of the device, we believe that after the launch of this spin-off company, we will be able to reach far higher numbers, at least dozens per year,” said one of the founders of Iron Analytics, Roman Jurečka. The Mössbauer spectrometer is a laboratory instrument currently used in universities and research organisations. It is used to analyse materials that contain iron or iron oxides. “Mössbauer spectrometry has so far found applications primarily in the field of nanotechnology, but also in pharmacy, archaeology or mineralogy, for example. Our goal is to make effective use of these devices in industry, especially in the area of quality management. I believe that we will be successful and we can inspire other scientists at Palacký University,” said the Managing Director of Iron Analytics and the originator of the know-how, Jakub Navařík. Iron Analytics is a type of spin-off company with no ownership interest of the university.

The first Mössbauer spectrometer was developed at Palacký University in 1993 for the needs of its researchers. The next generation of the device was offered for commercial purposes a few years later. About a decade ago, Jakub Navařík developed a third generation as part of his dissertation work, focusing more, together with his colleagues, on commercializing the device. He created an improved fourth generation, the one being licensed now, this year. Mössbauer spectrometers from Olomouc have been previously sold to universities and research institutions in the US, China, South Korea, Germany, Poland, France, South Africa and other countries.

The UP Science and Technology Park (VTP) already has one spin-off company co-owned by the university—the RRR Centrum (a centre for the treatment of painful conditions and movement disorders, spol. s r.o). Regarding spin-off companies, another six entities have been established in the past to commercialize UP’s intellectual property. “The newly formed Iron Analytics is the first of its kind as it identifies itself as a UP spin-off,” said Petr Suchomel from VTP UP.