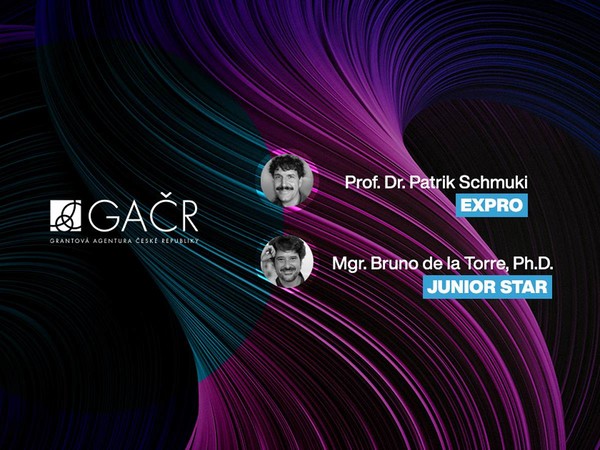 “I would like to heartily congratulate both colleagues, Patrik Schmuki and Bruno de la Torre, on receiving these prestigious grants and thank them for their excellent work and superb research results. I’m very proud that CATRIN has such outstanding researchers. CATRIN thus continues to confirm its extremely high success rate in obtaining research grants and its ability to ensure its own economic sustainability,” said CATRIN Director, Pavel Banáš.

According to him, achieving these results would not have been possible without a combination of world-class science and the professional grant support that CATRIN has. “It is the system of grant support that we have built through the integration of research capacities into CATRIN that is proving to be crucial for our success. Therefore, my thanks also go to the employees of CATRIN’s Grant Office. I am very happy that with these achievements we can contribute to building the reputation of our university,” added Banáš.

As GACR states on its website, both prestigious grant schemes aim to promote scientific excellence by creating favourable conditions for research. While EXPRO is intended for experienced scientists who have a groundbreaking idea, JUNIOR STAR allows early-career researchers to pursue their own research topic and build their own research group.

“In the EXPRO and JUNIOR STAR competitions, only the best projects that are approved by international evaluation panels receive funding. Their principal investigators have better conditions as their projects are funded for the period of five years. What is important are the expected results—EXPRO is expected to make a breakthrough in the given field of science and JUNIOR STAR helps to build a new independent scientific generation,” said the President of GACR, Petr Baldrian.

The evaluation process involves exclusively foreign scientists. It takes place in two phases—each project is first evaluated by six experts in the given field and then discussed in detail at the meeting of the discipline committee.

In this year’s EXPRO grants competition, out of the ten funded projects, Masaryk University won three, and the Czech Academy of Sciences, the Czech Technical University in Prague, and Charles University received two each, with one being awarded to researchers from Palacký University Olomouc. Over CZK 450 million will be spent on their implementation.

From next year, 23 JUNIOR STAR projects will be funded, most of which will be implemented at Charles University (5 projects), Czech Technical University in Prague (4 projects), the University of Chemistry and Technology, Prague (4 projects), and the institutes of the Czech Academy of Sciences (3 projects). One goes to UP. More than a half a billion Czech koruna has been allocated for these projects for the next five years.