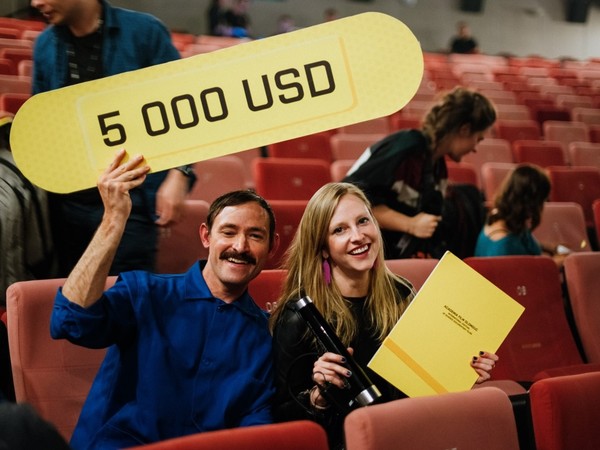 International Competition, Czech & Slovak Competition, Short Film Competition. Plus the student jury prize. All these categories have already announced their winners for the 57th Academia Film Olomouc (AFO), which took place from 26 April to 1 May 2022. Almost 6,000 visitors were accredited to the popular science film festival organised by Palacký University Olomouc. They could choose from 250 programme entries ranging from film screenings to lectures, workshops, concerts, and exhibitions to activities for schools and entire families.

The jury of the International Competition highlighted three films featured in this year’s strong competition. Two thematically very different documentaries received special mention: The Garden of a Thousand Bees builds on the huge success of The Land of Honey in popularising beekeeping; however, it also reflects the pandemic situation and the need to find new passions in a period when ordinary life was put on hold. Pleistocene Park, on the other hand, takes viewers on a fascinating trip to Siberia, where an ageing scientist, Sergei Zimov, and his family try to prevent the permafrost from thawing.

“Nonetheless, the main prize of the International Competition went to the documentary Fathom. Its director Drew Xanthopoulos follows two female scientists who are researching whale communication. The film deals equally with field research, the communication of new scientific knowledge, and the lives of the scientists themselves who decided to devote their professional careers to this subject matter," said the festival’s head of programming Ondřej Kazík.

The jury appreciated it as a beautifully crafted film, extraordinarily shot and recorded by one single person. “It is stunningly moving in many ways and offers rare insights into the emotional and personal challenges of working in the ocean environment. The sound is an element that enhances the film, seamlessly blending the music of the whales with other elements of the environment. The documentary lets its protagonists speak with a rare and immediate honesty,” said the members of the jury in agreement.

Special mention went to the short film Czechia Deforested (Holoseč). This visually captivating student film raises the issue of Czech forests that may be irreversibly damaged by the bark beetle. The winner was Ivo Bystřičan and his episode from the series Industria, entitled Manufacturing War (Industrie – Výroba války). “The series playfully combines commentary by leading Czech experts and work with archival material and animation. The winning episode depicts the operations of Tomas Bata’s factories during the World War I. Far from being a dry analysis of the workings of one company, it is a complex historical excursion that is not afraid to demolish historical myths and to question the nature of the system,” added Kazík.

In the category of short films, special mention was given to festival guest Peter Galison and his moving story Shattering Stars. He delves into the black-hole research, but in animated form and via the story of Indian scientist Subrahmanyan Chandrasekhar, who was the first to discover and describe black holes back in the 1930s. However, his findings were dismissed by the scientific community at that time, and he did not receive any recognition until fifty years later, when he was finally awarded the Nobel Prize in Physics.

The winner of the Short Film Competition was The Problem of the Hydra. This intense experimental short film takes viewers out of their comfort zone through the articulation of existential questions that keep us awake at nights. Who is the creature at the centre of the action? A microscopic animal, the fresh-water polyp a/k/a Hydra vulgaris!

The student jury gave their award to the documentary Carbon – An Unauthorised Biography. Here the gas, today perceived mostly negatively, is the protagonist who presents its life story to the audience.

Daniel Stach, a top TV host at Czech Television, who gave a talk “Science for Everyone” at AFO57, received the Award for Significant Contribution to the Popularisation of Science. “Thank you very much – not only for myself, but for the whole team, without whom no broadcast could be made, whether it is the Hyde Park Civilisation programme or anything else produced by our science editorial team. Thanks also to AFO – not only for the award, but most of all for helping people think, for giving them opportunities to delve more into the world of science, and for allowing them to see the world differently through the eyes of science,” said the laureate Stach.

A total of 230 people, most of them UP students, were involved in the preparation of the festival, which took place live again after two years on-line. “I admit I was a bit worried during the preparations about whether we would be able to bring AFO back into the limelight after the two-year hiatus. However, since the festival has started, I have been constantly moved, because the screening rooms were full, the debates after the films were extremely inspiring, and guests from all over the world came to compliment me on how great this event was. British producer Archie Baron, who showed his film Vaccine – The Inside Story this year, thanked me that without AFO, this film would probably never have been made. Because it was AFO in 2019 where he met producer Janet Tobias, and together they managed to bring this very challenging film, produced in the middle of the global pandemic, to a successful conclusion,” said AFO Director Eva Navrátilová.

The international festival of science documentary films Academia Film Olomouc (AFO) has been organised by Palacký University Olomouc since 1966. The festival is one of the oldest Czech film events. By the number of accredited visitors, it is one of the most attended film festivals in the Czech Republic. This year it took place in the UP Arts Centre (Convictorium), Kino Metropol, the Sts Cyril and Methodius Faculty of Theology, the Regional Museum in Olomouc, Fort Science, the theatre Divadlo na cucky, the Jazz Tibet Club, and the Za()hrada community garden.

Those who missed the festival in Olomouc can watch the best films on-line from Monday 2 May as part of AFO Echoes on the DAFilms platform.

More information can be found here.