Czech Scientists Have Created the Smallest Metallic Magnets in the World 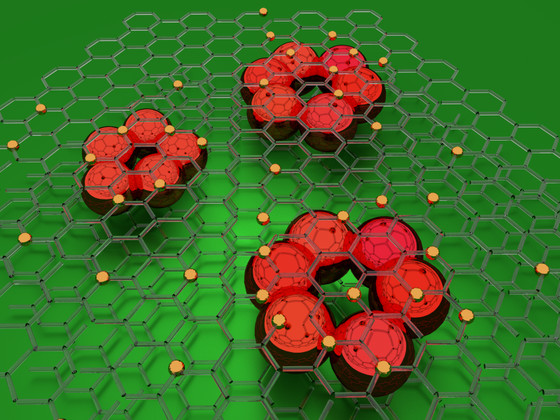 The world’s smallest metallic magnets have been constructed by scientists from the Regional Centre of Advanced Technologies and Materials (RCPTM) at Palacky University together with colleagues from Prague and Singapore. The magnets were prepared by using the Nobel prize-winning material graphene as a chemical trap, enabling the formation and stabilization of metallic particles only a few nanometers in length. The scientists are already testing the performance of these “nano-magnets” in medical diagnostics, but they are also likely to have important applications in ecology, electronics, and biotechnology. A paper describing the findings of the Czech team and their collaborators was published in the prestigious journal Nature Communications this week.

The magnets were prepared by combining nanoparticles of iron, nickel, or cobalt with chemically modified graphene. Graphene can be represented as a sheet of carbon atoms that is only one atom thick; it is stronger than steel, conducts electricity much better than copper, and is completely transparent to light. "By chemically modifying graphene, we can control its electrical, optical and magnetic properties. In this study, we used specially modified graphene to imprison ultra-small metallic nanoparticles between graphene sheets, which prevents them from reacting with oxygen to form more common but less strongly magnetic metal oxides. This allowed us to create a new class of very powerful air-stable magnets", said Prof. Radek Zboril, the project leader and director of RCPTM.

Pure metal nanoparticles have attracted scientific interest for decades, largely because some of them exhibit a property known as superparamagnetism. "This phenomenon is inherent to very small magnetic particles, which show a strong and rapid response when exposed to an external magnetic field. It has been seen in metal oxide nanoparticles and its occurrence in more strongly magnetic particles of pure metal was predicted by theorists but had never been demonstrated experimentally. Such small metal particles are extremely reactive: they spontaneously ignite under normal conditions in air ", says Dr. Jiri Tucek from RCPTM, a leading Czech physicist in the field of magnetism.

How did the Czechs overcome this experimental challenge? "The synthetic procedure is quite simple - one must work under an atmosphere of hydrogen and exploit the oxygen-bearing functional groups acting as a bridge between nanomagnets and graphene. The approach enables the preparation of a wide range of small and stable metal magnets. Moreover, the reaction’s yield is very high, making it possible to produce large amounts of the nano-magnets. Large-scale production is often a major barrier to the practical use of many promising technologies based on graphene", explained Dr. Zdenek Sofer from the University of Chemistry and Technology, Prague, who developed the synthetic procedure.

The Czech team has already demonstrated the performance of their metallic nanoparticles in medical diagnostics. Experiments on mouse models at the Brno laboratories of the Institute of Scientific Instruments of ASCR have shown that metal nanomagnets are very promising contrast agents in magnetic resonance imaging. However, the technology may have many more applications. "Anchored magnetic nanoparticles can be easily manipulated with graphene without affecting its unique surface and physicochemical properties. Composites of graphene with metal nanomagnets could therefore be used as sensitive electrochemical sensors, and also in electronics or magnetooptical technologies. Their potential for easy transport and ability to trap chemical substances on the graphene surface also suggests applications in water treatment, targeted drug delivery, and the separation of important biomolecules in biochemistry and food", said Prof. Martin Pumera, a co-author of the study who works at one of the world’s leading universities in Singapore.

The scientists from Olomouc have had many important successes in the fields of graphene research and magnetism. A few years ago, they prepared the world’s thinnest insulator based on fluorographene. More recently, the same team of authors reported the creation of the world’s strongest organic magnets based on graphene. Prof. Zboril believes that their current discovery will not be their last, saying: "We have developed the first carbon-based, completely non-metallic magnets that show self-sustaining magnetism at room temperature. While this research is at an early stage, if we can fully explain and exploit this phenomenon it could constitute a fundamental breakthrough in the physics and chemistry of solids, comparable to the discovery of non-metallic organic conductors in the seventies."